For many years, the traditional arrival of Santa Claus in Lorain was on the Friday after Thanksgiving, officially kicking off the Christmas shopping season.

That's why it was surprising to see that in 1962, Santa was scheduled to arrive at Hills right on Thanksgiving, according to the ad below which appeared in the Journal on Wednesday, November 21st. 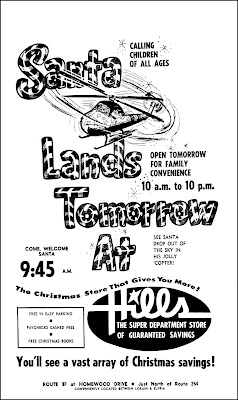 The Thanksgiving arrival is somewhat downplayed in the ad, which notes that that the store would be open on that day "for family convenience." At least Santa's arrival was scheduled at 9:45 am, so as not to disrupt the family get-togethers that would be centered around dinner.
This ad ran in the paper on Thanksgiving, reminding shoppers that Santa was arriving that morning. At our house, Thanksgiving morning would mean that we'd be watching the Macy's parade on TV, suffering through an endless procession of so-so marching bands and dancers, just to get a glimpse of the "real" Santa Claus, bringing up the rear.

Thanksgiving Morning at the Hiltons

Dad: "What're you kids doing in the house? Go outside and get some fresh air."
Mom: "Bill... we're going to watch the parade."
Dad: "The boys don't want to see that stuff!"

Too right, Dad.
Thanks for saving us!

As a kid, I liked the giant balloons, especially Bullwinkle.

You're right, Alan – that was the best part of the parade, seeing the big balloons: Bullwinkle, Underdog, Linus the Lionhearted, etc.