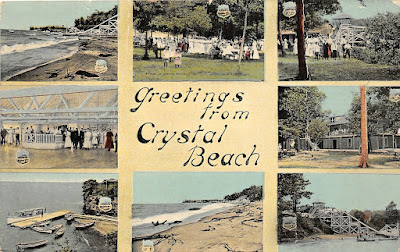 Although Cedar Point is well-known nationally as an amusement park, fewer and fewer people these days remember that Vermilion, Ohio once had one of its own for more than half a century.

Crystal Beach Amusement Park was a very popular destination since 1907, with a variety of attractions to amuse and entertain its visitors. But it all ended sixty years ago in October - November 1962 when the landmark park was sold and its rides auctioned off.

Below is the announcement of the sale of the park on the front page of the October 30, 1962 Journal. 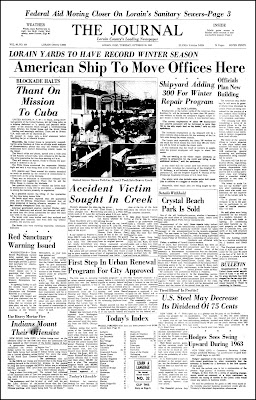 The article notes, "In the transaction, permission was granted for the amusement park owners to retain possession of the rides, which will be dismantled and moved from the site." The Friday, November 9, 1962 Journal included the article below about the upcoming auction. 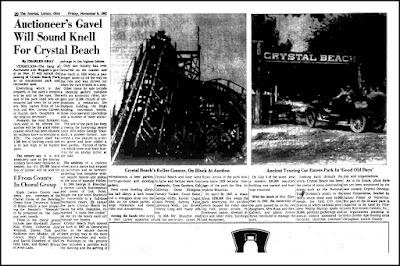 "Everything which is the property of the park's owners will be sold on the spot," the article points out. "Probably the most fantastic item ever to be offered for auction will be the giant roller coaster which has been enjoyed by millions since its erection in 1925."

Ten days later as reported in the November 19, 1962 Journal, the auctioneer's gavel came down, and the roller coaster rolled away forever for $400.

Today, Crystal Beach is honored with a marker (which I wrote about here) at the site of the former amusement park.

Wish I could have visited this park, but I missed it by a few years. Great article. Thank you!