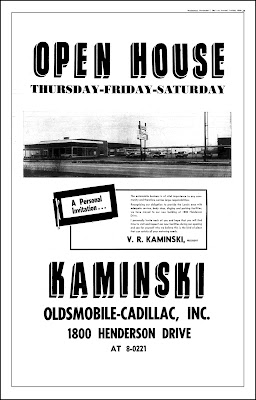 Sixty years ago this month, Kaminski Oldsmobile celebrated the Grand Opening of its new dealership on Henderson Drive. Above is the full-page ad that ran in the Journal back on November 7, 1962.

Exactly five years earlier, the business had held a Grand Opening at its first location at 2950 Broadway (the former home of Vogt Oldsmobile). Kaminski must have set a goal of a brand new facility in five years, and stuck to it.

My parents bought their first Olds at the Henderson Drive dealership, launching a love affair with the brand that lasted right into the 1990s. That car was a 1963 or 1964 F-85. 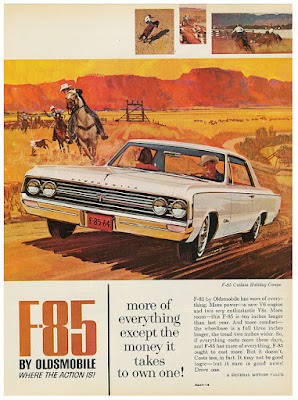 We had that car well into the 1970s, as it was my dad's work car. I also remember driving it a few times after I had just gotten my license. It had those little vent windows that were such a nice feature.
Speaking of F-85s, here's a vintage Kaminski ad from the October 3, 1962 Journal for that particular model. It just might have been the ad that made the Bradys an Olds family! 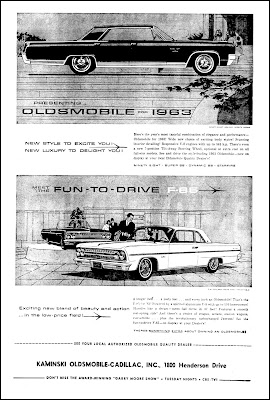 Totally forgot about the vent windows..........those were cool.

I remember the day Dad brought it home. No fins! I also remember the lack of power steering. It was great for building upper body strength.

I really miss those little "no draft" windows.

Turn the handle and give 'em a little bump with your fist to get the air moving a little.

I especially liked turning them around the whole way and blasting air through the car.

Though, they did tend to whistle at highway speed.

But... Would I trade air conditioning for them? Nope. No way!

I was at a tag sale a few years ago.They had a bunch of automotive books for $1.00 each.Inside the pile of books was a technician service manual from 1960 with the words "KAMINSKI" written on the top and on the spine.Turns out the person worked at KAMINSKI Olds when it was at both locations.