I've only seen one Salvation Army bell-ringer so far this fall, outside of Walmart in Lorain this weekend. But right after Thanksgiving, they'll very likely be all over the place, and the sounds of the bells will be a cheery sign of the season.

Other years, the Salvation Army seems to have started its campaign much earlier. Was there a decision made this year to start later? I don't know. But I'm glad that the kickoff seems to be closer to the actual beginning of the Christmas season, so we don't get tired of it. Putting something in the Salvation Army kettles is always a special part of the holiday.

And sixty years ago, the Salvation Army in Lorain was dedicating its new home on Broadway, as noted in the full-page of articles and ads below from the November 3, 1962 Journal. 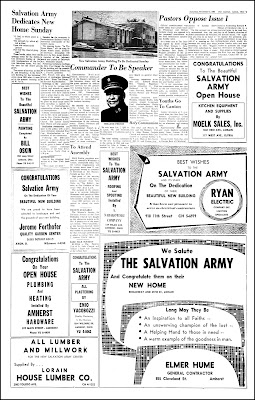 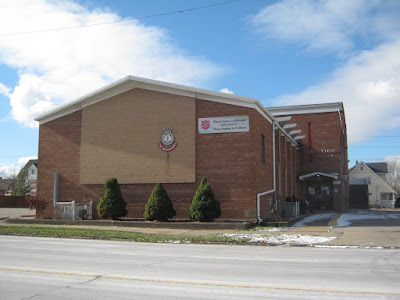 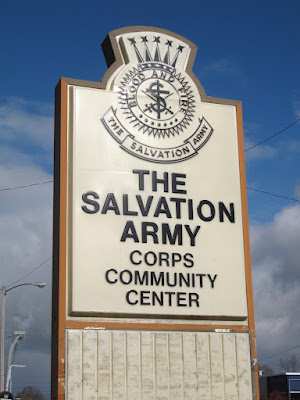 The Salvation Army's mission may still be the same and I'm glad they are still there.But that area is slum central and they should move to a better neighborhood.A few years ago on West 26th St. there was a drug flop house and a few druggies overdosed and died.The house was in plain sight of the Salvation Army headquarters.The police found thousands of needles in the house and garbage,tires,and junk around the yard and the two aforementioned junkies dead on a mattress.Plus all the other numerous drug deals,rapes, prostitution and robberies that are unreported in that area.Maybe it is time for a change.Change is good.

They had the 'Keenagers Program' for the seniors. Mom and Dad were members. They started making these ugly clown dolls and people really started to buy them to resale. Gave the Keenagers something to do and the profit went to the Salvation Army and they helped to buy a bus to take the seniors on field trips. All the Seniors had to do was drive to the parking lot and they would take the bus on a trip to Amish Country / The Fair / Metropark. I used to go there once a week to look for old clothes to buy cheap when I was between jobs. I remember when they built the gym on the place. Can't keep running away because their mission is to help the people.