Back in the 1950 and early 60s, the advertising world seemed to love stylized cartoon mascots. Drawn with a thick line around them, the simplified character designs were perfect for use in animated commercials on the tiny, dimly lit TV screen, or in small print ads.

The best example of this was the long-running campaign for Piels Beer, featuring cartoon characters Bert and Harry Piel. 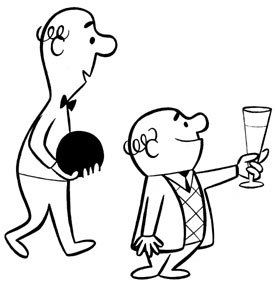 By the 60s, many companies had adopted this new, simplified style for their own advertising uses.

A good example is this ad for Llewellyn Pontiac, which ran in the Lorain Journal back on November 1, 1962, featuring a cartoon Indian. 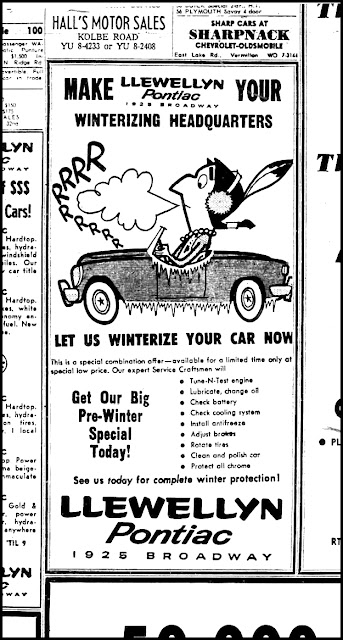 When I first saw the ad, I failed to make the connection that the Pontiac brand was named after the Native American warrior, Chief Pontiac. Figuring that it was just a piece of clip art that just happened to be an Indian, I assumed that the ad copy would make reference to a "heap big deal" or something along those lines. But no, it was just Pontiac's advertising reflecting what was popular at that time.

Today, even a tastefully done ad campaign built around a Native American motif would be a no-no. That's why the Cleveland Indians are no more, and Land O'Lakes butter has no mascot.

Personally, I found nothing wrong with Aunt Jemima, Uncle Ben, or the Cream of Wheat man; people need to grow up.
I passed Llewellyn Pontiac every day, since we lived just east of it, on Elyria Avenue. A family friend, the late Howard Jackson, was a mechanic there, and I would wave to him going to and from school.

Where I grew up, Aunt Jemima, Uncle Ben, and the Cream of Wheat man were the only non-White people I ever saw. I recognized, right away, that they were more successful than anybody else I knew!

For many years a Pontiac sign stood in a front yard on Elyria Ave just north of Rt 254. It was steel bars bent in the outline of the Chief's head and painted red. I have never seen another that was just the outline, they are usually filled in.