A few days before Election Day 1962, the Journal was filled with ads both for and against the statewide amendment sponsored by Lawson's that would allow the dairy chain to be open on Sunday.

Here's another full-page ad opposing the "Sunday Necessities Amendment." It ran in the paper on Monday, November 5, 1962. 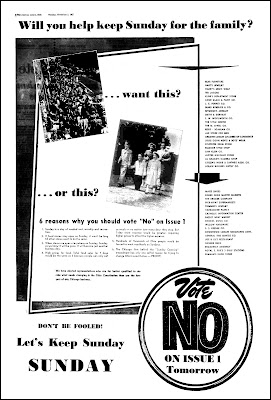 Interestingly, the ad features the names of many popular local businesses encouraging a "No" vote, including Hart's Jewelry (a favorite on this blog), Ted Jacobs, Kline's, Smith & Gerhart, the Style Center, Sam Klein Company, Jupiter Discount Store, McKee Shoes, Bazley Meat Market, Driscol Music Co., and Willow Hardware. Grocery store giants Kroger, Pick-N-Pay and Fisher Foods also opposed the amendment.
In the end, surprisingly, the amendment failed – and consequently opened a can of worms in the process. On the front page of the November 7, 1962 Journal, it was noted that Lorain was going to begin to enforce the blue laws on the books, due to "the overwhelming defeat of Issue No. 1
Lawson's had the final word a few days later, when the ad below ran on Friday, November 9, 1962. 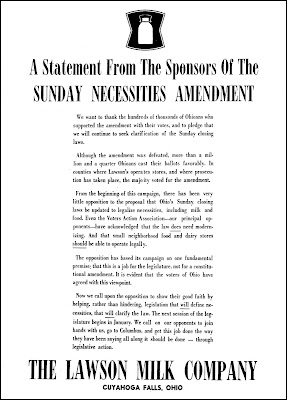 It wouldn't be until 1973 when the blue laws were officially repealed in Ohio.
****
Despite failing statewide, it was actually a close vote on Issue 1 in Lorain County. According to an article in the November 7, 1962 Journal, the law "was supported by a slim 77-vote margin."
Issue 1 was supported by Avon, Oberlin and Sheffield Lake. It failed in Lorain, Elyria, North Ridgeville, Amherst and Avon Lake.
In Lorain, Issue 1 lost by 428 votes; in Elyria, a mere 28 votes. And it was supposed in Sheffield Lake with a 217-vote majority.
Posted by Dan Brady at 5:23 AM

Much like when I told them about seasonal foods: fresh fruits, vegetables, and the like. You had to wait for a certain time of year to buy them.

It might be fun to return to that sort of schedule.