On Monday's post, it was noted that the popular Cleveland TV personality Mike Douglas was going to be emceeing the Mary Lee Tucker Christmas Benefit Show.

Well, as I noted, the rest of the Mary Lee Tucker performers were usually made up of local talent. That included the musical group that would provide backup where needed for the various acts, as well as appear as an act themselves.

As usual, the Biz Grove Orchestra was that group. As noted in the caption accompanying the photo above, which appeared in the Journal on November 29, 1962, "The Biz Grove Orchestra will perform at The Journal's annual Mary Lee Tucker Christmas benefit, produced by the City Club of Lorain on Dec. 5 at 8 p.m. at the Palace Theatre. Leading the 14-piece band is Chuck Bizgrove [sic] at center. Members are: John Byers, piano; Bob Gawn, bass; Bob Aukerman, Mel Gymorie, Vic Kubiak on trumpets; Dick Reed, drums; Gary Potter, and Bill Sheppard and Dick Cooley on trombones; Paul Kumler, Jack Ruth, Ed Nemecek and Frank Katrick saxophones. 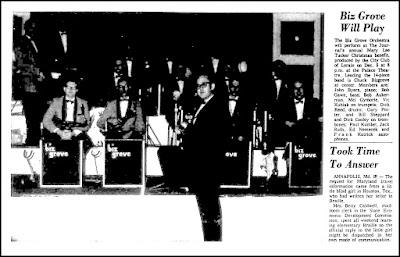 The Biz Grove Orchestra has been mentioned on this blog before, including when it performed at the 1960 Mary Lee Tucker show. 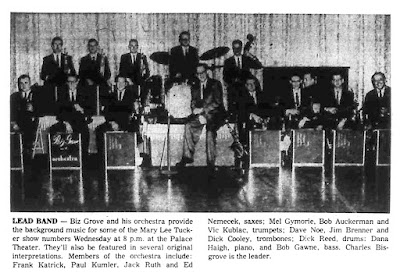 Anyway, I've mentioned before how my older brother Ken and I were members of the Biz Grove Orchestra in the 1980s. Many of the same band personnel from the 1960s were still with the group twenty years later.
I'll be writing some personal reminisces about that experience in an upcoming post very soon. (You know, just like I did with the Pueblo).
Posted by Dan Brady at 5:35 AM

Looking forward to your orchestra blog!

I remember Charles Bizgrove later on worked at Lorain's Fairhome Elementary School as a custodian.I also saw The Biz Grove Orchestra play a gig at the Midway Mall.I think it was in front of J C Penneys.