Of course, by the time many of us became acquainted with these stores in the 1960s, the pricing had moved well beyond a mere nickel or dime. But the stores were still a lot of fun to poke around in if you were a kid, especially during the era when they were still selling turtles in the pet department.

I remember the W. T. Grant store in the Lorain Plaza pretty well. We just called it Grants, and that's what it's called in the ad below, which ran in the Journal back on November 8, 1962.

According to the ad, besides the Oberlin Avenue location, there were outlets at Westgate, Oakwood Plaza and in Elyria on Broad Street.
The items shown in the ad are a mixture of Grants products (like the tricycle) and well-known brands (like the Etch-a-Sketch). I see a little nurse kit for one dollar that kindled a long-dormant memory; my older sister had something similar that had little containers of candy pills in it.
Of course, the thing in the ad that caught my attention the most is the toy with Fred Flintstone riding Dino, his pet dinosaur (actually he was a Snorkasaurus). Those of us that watched the show know that Dino wasn't that big, and that the toy was probably based on the scene in the show's opening credits where Fred is working in the gravel pit. 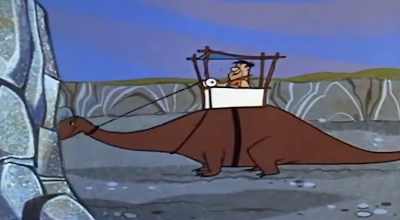 The Grants ad reads, "TV's favorite, Fred Flintstone has Dino in rein. Both jog along in a funny way. Sturdy metal construction, purple plush skin.
"Dino gurgles!" is listed as one of the toy's attributes. (Maybe from drinking too much Welch's Grape Juice?)
Amazingly, many of these toys have survived and are all over the internet. Here's an ample sample. 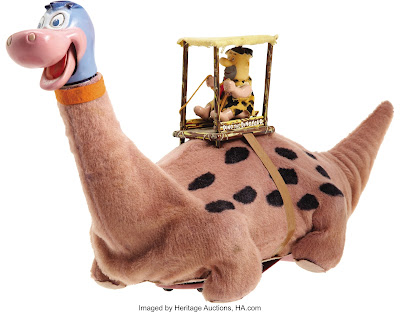 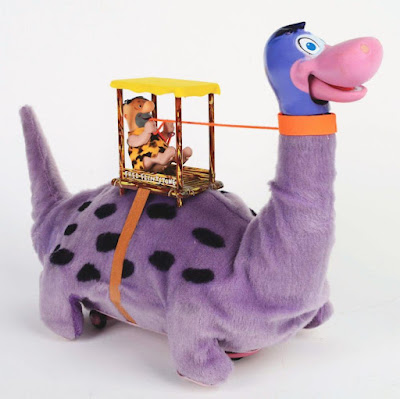 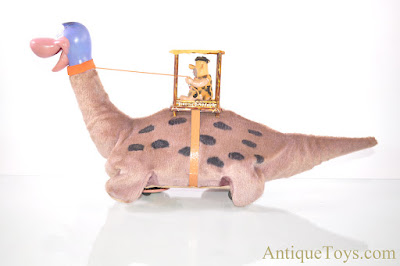 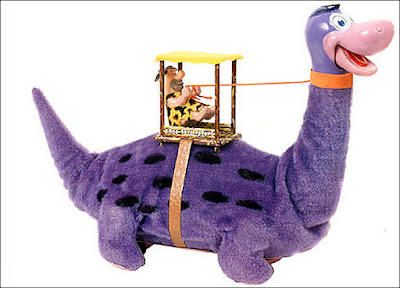 I'm kind of surprised that we didn't have one of these in the house, considering that we had the Flintstone Play Set (by Marx!), Flintstone Checkers and the large Knickerbocker dolls. 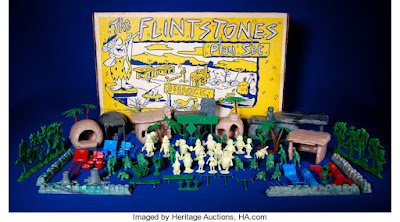 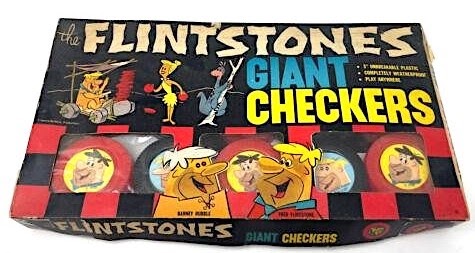 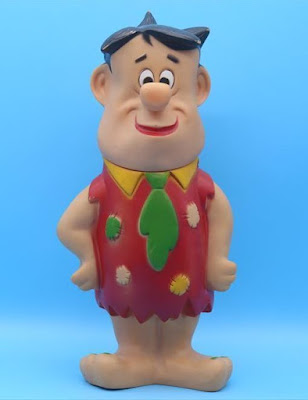 Who could forget my favorite dime store “Jupiter “ downtown. Great fountain coke and my mom would buy yarn for crocheting.

I recently began working in the recycling industry and someone there told me that every single toy that everyone of us had as children is still in a landfill somewhere because the plastic that they were made of doesn't deteriorate. This isn't meant to be a political statement, I just thought that was one of those things that make you go "hmmm" statements.

I remember going to the Lorain Plaza W.T. Grant store as a child of seven, my five year old brother and I perusing the toy department, then meandering over to the pet department, where, among the goldfish and goldfinches, was a live ocelot in a cage; I remember wishing that I had the sixty-nine ninety-nine they wanted for it, so that I could take it south and set it free.

...What I remember about Grants was their plastic model aisle - unlike Big Town, Grants had a seriously inexpensive but wide selection. Fifty cents could get you a decent Lindbergh kit, a dollar something from Aurora, and if you'd gotten some coin for your birthday or Christmas, a Monogram or Revell kit with working everything.

As if it was as usual as the Tribe in 4th place at the All Star break, the Dick Tracy .38 snub-nose revolver, complete with caps and bullets (BULLETS!!), was on sale for only $2.97. No minimum age restrictions. No background check required.

And if impersonating law enforcement was your thing, a badge was included to assist with those dicey traffic stops you made on your new tricycle!!

Those Revell kits were cool except I had glue on my fingers for days.