Although it's been downright balmy during the past couple of days, we had some pretty cold weather a few weeks ago in Lorain County. I think it caught us all by surprise to see snow on the ground so early. (The day that I needed a scraper to get the snow and ice off my car's windshield, I remembered that all of mine were snug and warm inside my storage unit at the former Lorain Drive-in.)

But at this time back in November 1950, the city was digging out from a true two-day blizzard. Below is the front page of the Journal from November 27, 1950. 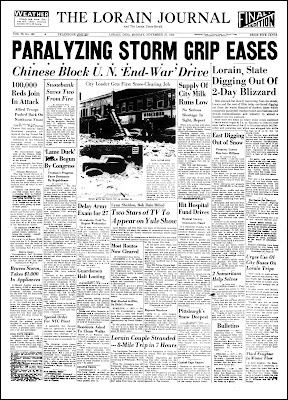 As the article notes, "Still stunned but slowly recovering from the shock, Lorain and the rest of Ohio continued digging out from the worst blizzard of modern times which completely paralyzed transportation and business and slowed communication and industry to almost a standstill over the week-end.
"More snow felt today as weary street crews continued a battle which began at 2 a.m. Saturday to clear at least main traffic arteries of the 12 to 20 inches which fell Saturday and yesterday and which was whipped into drifts as high as 10 to 12 feet by strong winds.
"Snow flurries were predicted for the next 24 to 26 hours, forecasters said, but no appreciable fall is expected."
The snow was not restricted to Ohio. Another article on that same page observed, "Life for most of the eastern seaboard's millions was getting back to normal today, 48 hours after the great Appalachian storm spread death and destruction from South Carolina to Maine.
"Most power, traffic and telephone service torn up by the storm was restored yesterday but many areas still were cut off – mostly suffering from power failure.
"Thousands still shivered from lack of heat and met the darkness with candles – if they were lucky enough to have them."
Elsewhere on that same page were other snow storm related stories: an article about how the storm "had choked off milk supplies" in Lorain, since farmers couldn't get their product to market; and a report of how two "Good Samaritans" helped a Columbus man get his stalled car going – and then stole it!
Posted by Dan Brady at 12:34 AM

I remember the storm.I was 13. My dad and I walked down 5th st to a movie at the Palace.Dont recall the show.

My grandfather would always talk about various Lorain winters being bad.But he said he would never get stuck in the snow anywhere he went,even in bad blizzards like in 1950.I remember him always saying that he had Firestone Town & Country snow tires on any car he drove in the winter.He said they were the best snow tire he ever had.