It's almost Christmas, so here's an ad for Oakwood Shopping Center announcing Santa's arrival that appeared in The Lorain Journal on November 27, 1958 – the same month that the shopping center opened. But the ad is interesting to me for another reason.

The ad caught my attention because its copy reveals that the purse-carrying squirrel shown in the ad – the one that I thought was named Oakie – is actually named Pearl! As stated in the ad, Santa Claus "and his helper, Pearl, the Oakwood Shopping Center Squirrel, will meet, greet and thrill youngsters of all ages."

I've spent a lot of time on this nutty controversy – both on this blog (here) and on my other website (here) as well!

The confusion started right with the Nov. 1958 Grand Opening ad, which made reference to "Oakie" – but included no definitive picture of him.

Meanwhile the purse-carrying squirrel was used in almost every ad, and on signage as well – so I assumed that squirrel was Oakie!

A few years later, some Oakwood Shopping Center ads appeared in the Journal with this vest-wearing squirrel along with the words, "Oakie says...” 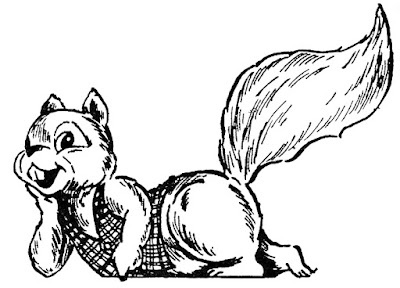 I just assumed that the owners of Oakwood had decided to make Oakie the first transgender squirrel.

Anyway, that's it in a nutshell – Oakwood Shopping Center used two named squirrels in its advertising: Oakie, the little guy with the checkered vest, and Pearl, the "thrifty" girl squirrel with the purse. They were there right in the very first ad for the shopping center (a portion of which is shown below). 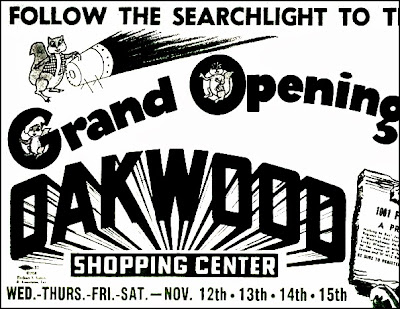 So that wraps up yet another Lorain mystery on this blog.

Hey, wait a minute... I wonder if that third squirrel with the beret had a name?
Posted by Dan Brady at 6:25 AM