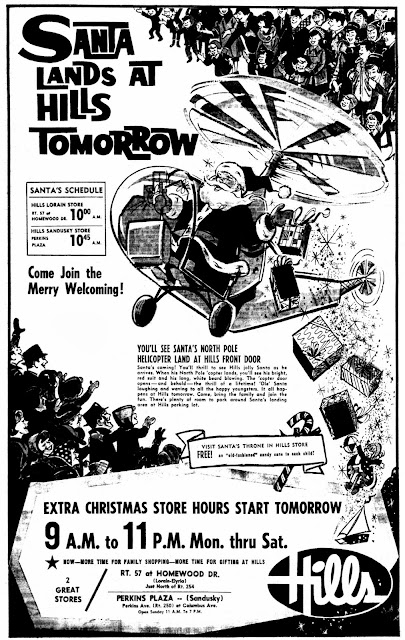 Just like yesterday, here's another case of Santa Claus arriving at a shopping center and eschewing his normal sleigh and reindeer in favor of something more modern and flashier. A week before Santa arrived by helicopter at O'Neil's, he did the same whirlybird thing at Hills in South Lorain.

This ad – with a more traditional illustration of St. Nick and an adoring crowd – ran in The Journal on November 22, 1963. (I've featured a 1960 Hills Christmas ad back here.)

A quick internet search reveals that Santa is still arriving by helicopter all over the country, in such cities as Oshkosh, Wisconsin; San Carlos, California; Keizer, Oregon; and Yardley, Pennsylvania.

Anyway, I still feel a little bad every time I pass the former Hills store on Route 57. Lots of good memories shopping there.
Posted by Dan Brady at 6:18 AM

This was such a big deal! I remember it very well - what a fun trip down memory lane!

Hi Dorene! Shame on me for not mentioning that the ad did double duty by including Santa's arrival at Perkins Plaza in Sandusky as well as at South Lorain! I'm glad you remember it and thanks for sharing your happy memory!

Of course, November 22, 1963 was memorable for another reason in Dallas, TX - the assassination of President Kennedy. Wonder if Santa actually showed up at Hill's that day. I was five months old and started to crawl on that day - my mother wrote about both events in my baby book.