Every year when the holidays roll around, it's time once again for The Morning Journal to begin accepting contributions for its annual Mary Lee Tucker Clothe-a-Child program, which provides needy school-aged children with warm winter clothing. Clothes are paid for by donations from Morning Journal readers and various organizations, and The Morning Journal absorbs the administrative costs.

It's a great program that's been a part of the Lorain scene each Christmas for as long as I remember, so naturally I was curious: how long has the Mary Lee Tucker program been around – and who was Mary Lee Tucker anyway?

Quite simply, "Mary Lee Tucker" was the pen name of the Journal's local advice columnist.

It was on February 15, 1926 that a special article appeared in The Lorain Journal's Women's page (below) announcing a brand new column written by Mary Lee Tucker. 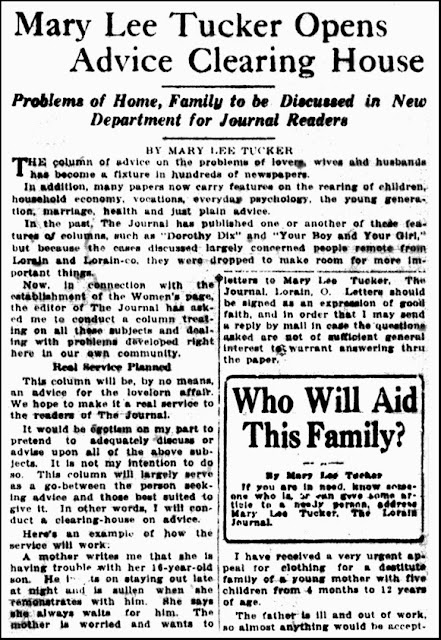 The article explained that while the Journal had carried a variety of advice columns in the past (offering advice on love, marriage, child rearing, etc.), the problem was that they were produced elsewhere and had no local Lorain angle. The new Mary Lee Tucker advice column would answer letters written and sent in by Lorain readers – which made it special and more relevant.

As you can see from the article, the philanthropic nature of the Mary Lee Tucker name was evident with the introduction of the column. "Who Will Aid This Family?" was the heading of a small box, which asked readers that if they, or someone they knew was in need, to contact Mary Lee Tucker at The Lorain Journal.

Mary Lee Tucker's Question Box began as a feature in the paper the very next day with two "canned" stories – one about a man who picked out a diamond ring for his fiancee – only to find out that she refused to accept it because it was too small – and the other about a young mother who was upset that her daughter had started smoking.

It was on Feb. 17 that the column received its first letter, and it was answered in the column on that date. The letter was from a Mrs. W. H., who asked if a husband had a right to open his wife's letters. It seems that her husband had opened a letter from her parents, and "because his name has not been mentioned he was angry."

Mary Lee Tucker's answer had two parts. The first part dealt with the legal aspect – that it was a federal offense to open first class mail not addressed to you. But she added that, "it is a serious offense against good taste to open another's mail without consent, even in the case of husband and wife. Society would be seriously demoralized if letters were habitually read, or censored, by a third party. The right to privacy in one's correspondence should be one of the privileges retained in the married state."
Posted by Dan Brady at 6:02 AM