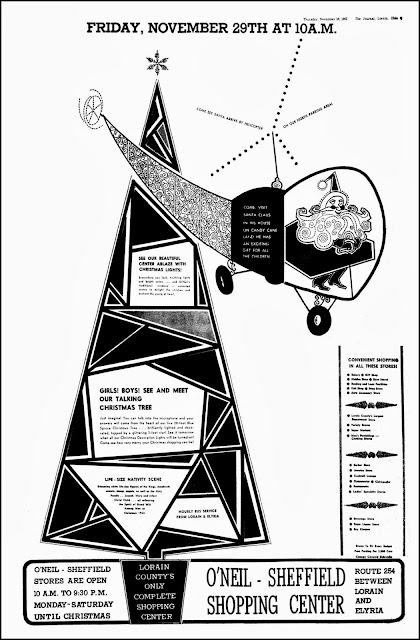 I used to think that when I was a kid, there was more of a gap between Thanksgiving and the Christmas season. But the more I peruse old microfilm, I realize that the immediate transition from holiday to holiday from a consumer standpoint has been going on a long time.

The ad above illustrates it pretty well. The ad – which ran on Thanksgiving, November 28, 1963 – announces Santa Claus' arrival by helicopter the very next day, as well as the other well-known O'Neil - Sheffield Shopping Center Christmas attractions, including the Talking Christmas Tree.

As a kid, I don't think I ever warmed up to the holiday tradition of chit-chatting with a Christmas tree – especially one that you weren't entirely sure was going to answer. Besides, there really was no story or TV show that included the gabby tree (unless you want to include the tree in Hans Christian Andersen's story, and he came to a sad end).

I've mentioned the Talking Christmas Tree before, back here and here, as well as the O'Neil - Sheffield Shopping Center itself here.)

Anyway, the full-page newspaper ad – which is 50 years old – has pretty stylized illustrations, and is quite a departure from the warm, fuzzy type of ads that you would see in the 1950s. It's almost a symbolic break from the past that the 1960s came to represent.
Posted by Dan Brady at 6:41 AM

I remember my neighbor would take a bunch of us little kidsto talk tothe tree, that was a great time... Then when I was older ( 13-14 ) a couple of buddies and I rode or bikes to ONeils to see the tree. My buddy said something to the tree thatwas not appropriate to say AND the tree answered back using his first name. We never knew who that was behind the voice, P.S. At least 1 year when Santa was in the basement, he was played by Cliff Bemis.
http://cliffbemis.com

Where at would the helicopter land? I have a memory of watching Santa arrive by a helicopter in Oberlin but now I am wondering if I am getting it confused with O'Neil's.......

I didn't see it but I'm guessing it was in the parking lot somewhere (for safety) rather than the grassy courtyard by the stores.

Does anybody out there remember?

I have memories of being there that day, Dan.

I guess I WAS there after all! (I sorta remember it but these days I'm not sure what's a memory and what's something I saw on TV--or in my imagination!)