The Mascon Toy Co. division of Masco Corp. was located at 3553 Broadway in Lorain from the mid-1960s until the mid 1970s – but the original business at that location had much earlier roots.

Before it became part of the Masco Corp. family, the company started out in the early 1920s as The Steel Stamping Company. Its earliest listing in a city directory was in the 1921-22 edition (although its address might have been outside of the directory's listing area in earlier editions).

Through the years, the company was usually listed as a toy and game manufacturer. A 1950 city directory ad listed its products as "steel toys, Hy-Speed wagons, wheelbarrows, automatic toy dial telephones, children's tubular chairs and tables, and tools and dies."

It was still listed as Steel Stamping Company in the 1963 book, although as a division of Masco Corp.

By the mid-1960s it was listed as the Mascon Toy Co. Division of the Masco Corp. By 1970, the parent company was now identified as Leisure Group, Inc., located in Los Angeles. By 1974 the directory listing for the company had changed to Blazon-Flexible Flyer Mascon Toys.

By 1975 the address was listed as vacant. Today it is the home of the Lorain City Garage.


****
It's pretty easy to go online and find photos of vintage toys made by the Steel Stamping Company in Lorain. They're usually phones – and here's a few of them (below). 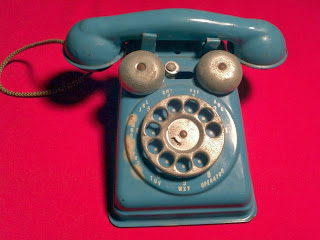 It's a little harder to find toys produced by the Mascon Toy Company, but here are a few (below). There are a couple of cute novelty banks, as well as the well-known Sticky Finger game. 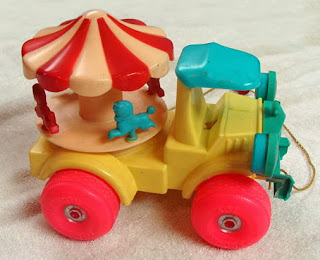 I had the Lion Tamer Bank, and I actually had Sticky Finger a great game for an only child LOL

...My aunt worked at Mascon during their heyday with Sticky Finger, and for one Christmas that was "THE" toy...and then it was like it had never existed. IIRC, they went under not long after that.

We lived right next to the toy company. On broodway. House is still there.someone the family knew worked there. We kinda got first crack at a lot of that.wish we still had it,but we were children