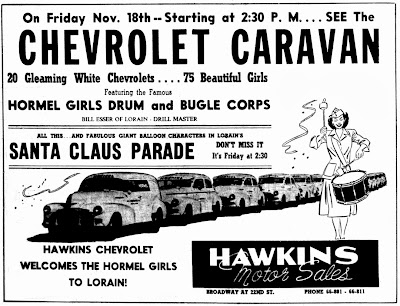 To wrap up this look at Lorain's 1949 Santa Claus Parade, here's an ad that seemed to be the only one that I could find promoting the parade in The Lorain Journal. The ad was sponsored by Hawkins Motor Sales at Broadway and 22nd Street and appeared in the paper the day before the event.

Although the Hormel Girls Drum and Bugle Corps were unable to perform, there was a fleet of new automobiles supplied by Lorain dealers and the Hormel Caravan fleet of cars.

It's interesting that the Hormel Girls Drum and Bugle Corps were to appear in Lorain to begin with. The group was created by Jay Hormel (chief executive officer of the Hormel Foods meat company) as part of an effort to find jobs for both men and women who had served their country. The members of the drum and bugle corps were all women veterans; many of them were recruited specifically because they had been members of women's military bands in World War II.

Their drillmaster was Bill Esser of Lorain, and I can't help but think that this probably had a hand in bringing them to town for the parade.

You can read more about the interesting history of the Hormel Girls Drum and Bugle Corps here and here.
Posted by Dan Brady at 5:56 AM