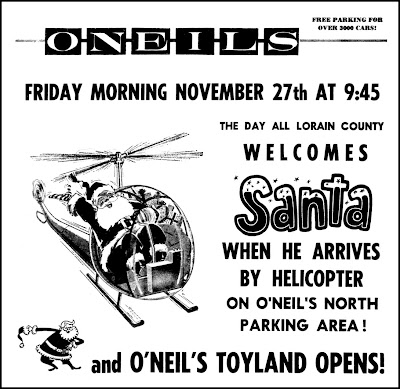 Remember when it was a big deal that Santa Claus would arrive at all of the various shopping centers and department stores in and around Lorain right after Thanksgiving?

He used to arrive at each one of them, it seemed – preceded by huge ads, sometimes full-page, in the Lorain Journal.

Above is the ad heralding Santa's arrival at the old O'Neil's shopping center (now Centre of Sheffield) in 1959. I like the way O'Neil's ad insinuates that theirs was the real Santa. He must have been, since all of Lorain County was going to welcome him, according to the ad!

Anyway, when it came to Santa showing up at a shopping center while I was growing up, he never seemed to arrive in a sleigh. It was always a helicopter or a fire engine, which seemed kinda suspicious to me.

Nevertheless, since I was pretty gullible, I figured that it must have been one of Santa's army of ubiquitous lookalike 'helpers', hamming it up with the locals.


****
Speaking of Santa's helpers, there seems to be a new trend developing. Nowadays, when I see one at a mall with kids on their lap, they always seem to be one of the "new breed" of Santa's with a real beard. The problem is, most of the time the beard is trimmed too short. Plus, these "new breed" Santa's don't seem to wear padding either (too phony, I guess) and they're often fairly scrawny. They look like their day job is peddling herbal tea in a health food store! They have no twinkle in their eye, either; they're just a guy who parlays his white whiskers into some extra cash during the holidays.

Give me a big, fat Santa with a phony beard and a pillow under his coat any day over these guys.
Posted by Dan Brady at 6:10 AM

Who else remembers the Talking Christmas Tree at O'Neil's?

My favorite Santa is still the one in Christmas Story.

I remember the Talking Christmas Tree at Midway Mall. I remember the Santa at O'Neil's [maybe May Co. by my time?] giving out pine tree seedlings and candy canes. He was on the lower level by the appliances, I think.

The Lorain Palace has a great real Santa.

I remember her, she was outside in the square. I remember being baffled. Also the chocolate on the lower level as you came in.
rae