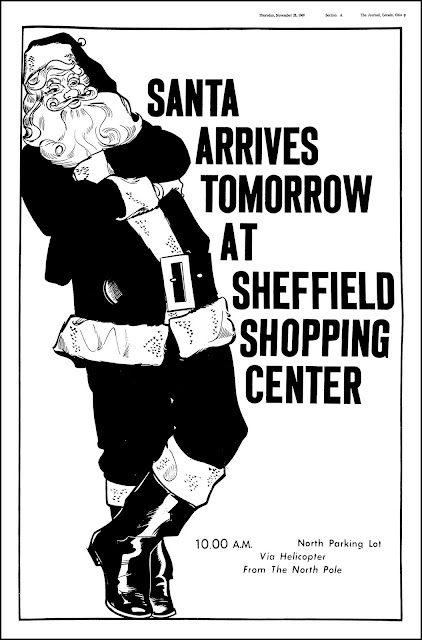 Well, it’s the day after Thanksgiving. Hope your holiday was great!

Fifty years ago, the day after Thankgiving was November 29, 1968. And that was the day that Santa Claus made his traditional arrival at Sheffield Shopping Center, as announced in the full-page Journal ad above.

(It’s kind of a strange looking Santa in the ad. Although he is usually described as being able to fit in a miniature sleigh, this ‘jolly old elf’ looks to be towering more than six feet tall. He also has one of the longest and most bendable torsos I’ve ever seen.)

Anyway, on that same day after Thanksgiving 1968, the article below ran in the Journal. It tells of the appearance of Edna Kaye’s Steel City Strutters of Lorain at Philadelphia’s 49th annual Thanksgiving Day Parade.

The photo of the Snoopy balloon is from the Macy’s parade in New York. Note the lighthearted holiday fare playing at the Astor.
Posted by Dan Brady at 4:35 AM

I remember one year, early 70's, the Elyria High Marching Band was in the Macy's Thanksgiving Parade. The host, the late Bob Crane of "Hogan's Heroes" fame, pronounced the name of our county seat as, "El-RYE-Ra"!

That's interesting about the EHS Marching Band in the Macy's Parade! By the way, I enjoy reading Alan Hopewell's comments!