Well, Christmas Eve is only a week away – so I’d better get going with the inevitable parade of Christmas-themed posts.

I guess it’s appropriate to kick off the holiday hoopla with a pair of 1960 ads anticipating Santa Claus’ arrival in Lorain.

The first ad is a full-page one from the November 17, 1960 Lorain Journal. But rather than Santa, it actually is promoting the upcoming Thanksgiving Day edition of the paper. The illustration depicts Santa straddling a jet resembling a missile. 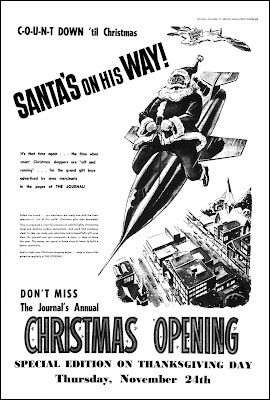 (I posted a similar ad years ago and remarked that it reminded me of the ending of Dr. Strangelove.)

The second ad announces the actual arrival of Santa in Downtown Lorain, and appeared in the Journal on November 24, 1960. 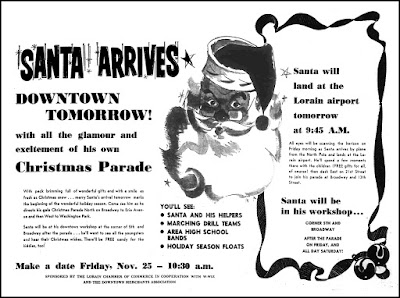 What’s interesting is that Santa was going to land at the airport on Leavitt Road, before heading down W. 21st Street to join his own Christmas Parade. It’s a nice reminder of the Lorain of old.
It all seems so quaint and small town-ish now.
Posted by Dan Brady at 3:52 AM

I've always wondered why that airport was surrounded by telephone poles and electric lines. Sure must have made landings and takeoffs tricky!