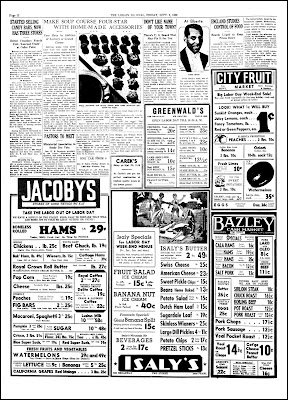 I originally saved this page from the September 2, 1938 Lorain Journal because it included a nice history of the stores owned by John H. Sutter. But there were enough things on the page that were mildly interesting that I posted the whole page.

Many older Lorainites remember Sutter's. Actually at one time there were two businesses downtown on Broadway by that name: Sutter's Nut Shop and Sutter's Sandwich Shop. The article above refers to a third Sutter's, located in South Lorain in the Lorain theater building on Pearl Avenue. Later there were even more outlets in the chain.

According to the article, "In the summer of 1926, John H. Sutter made his first sale at a concession stand at Cedar Point. The profits of that stand later became his livelihood.

"Today Sutter awaits the formal opening of his third shop and soda fountain in Lorain. The new shop is at 525 Broadway where light lunches will be served."

Here is a link to my own post about the history of the various stores.

Elsewhere on the 1938 page, there are ads for Jacoby's, Isaly's, and Bazely Cash Market.

At the top of the page is a photo promoting the appearance of Noble Sissle and his orchestra at Elberta Beach for the Labor Day weekend. To learn more about this talented jazz composer and bandleader, visit this Wiki page. He also wrote the lyrics for the hit tune, "I'm Just Wild About Harry" (from the musical Shuffle Along, for which he write the lyrics and Eubie Blake composed the music).

Also on the page are some recipes for various soup accessories. Some of them sound pretty good!

I have never heard of a "springer" milk-fed chicken before.

HI Dan , Great page....Does any follower here have the recipe for Sutters cole slaw dressing ? Ive been trying to duplicate it for 40 years.ITS not mayo based. its sweet -sour .....it was printed in the JOURNAL in the 80ssometime but didnt see it.BEST Ive had ever !!!!

Hi Harrison,
I couldn't find the recipe for Sutter's Cole Slaw, but found two recipes for Heilman's Cole Slaw. Here's one of them; they both use the same ingredients/

Thanks DAN ,looks good ill give it a try maybe this weekend....Sutters was made without cream and or mayo, like oil and vinegar with spices.Thanks for efforts.....the quest continues . Harrison