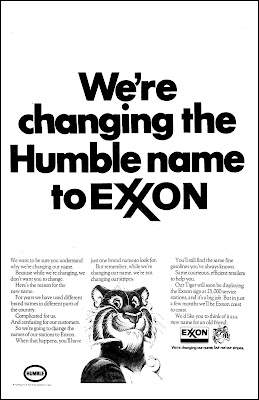 Mention the company name 'Exxon' to someone today and they most likely know it as a huge oil and gas corporation (and the one responsible for the 1989 notorious oil spill in Alaska).

But fifty years ago, Exxon had just become the new name for Humble Oil and Refining Company, previously doing business around the country under various brand names including Humble, Esso and Enco. The huge ad above announcing the name change appeared in the Lorain Journal back on September 12, 1972.

In 1959, Humble had introduced its popular "Put A Tiger In Your Tank" ad campaign featuring a tiger mascot. He soon became the face of the company and was seen in countless ads. 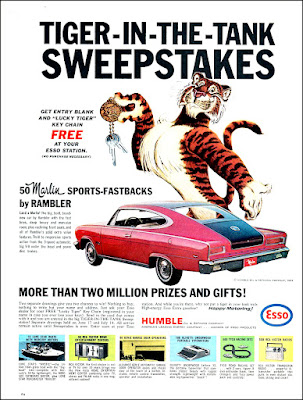 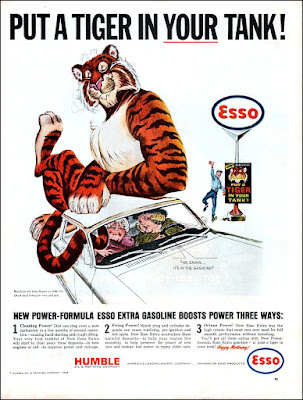 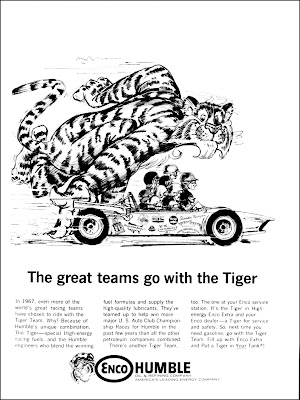 But although the tiger was seen smiling in the 'name change' ad, he would soon be privately growling in displeasure. Exxon dropped him in favor of a real tiger in its advertising, and the cartoon tiger was caged and packed off to the retired animal ad mascot zoo. 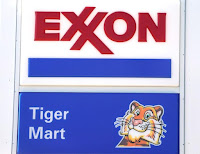 However, he made a comeback in the 1990s when Exxon used him to sell food and beverages in its Tiger Mart convenient stores. Unfortunately this led to a legal battle with Kellogg's, who didn't like another cartoon tiger competing with Tony to sell food.
The case went all the way to the Supreme Court, but was eventually settled out of court – with both big cats purring.
Posted by Dan Brady at 2:43 AM

In the small, Pennsyltucky town where I grew up the old, cantankerous, cigar-chewing owner of the local Humble gas station owner refused to hang the Exxon sign.

It sat beside the station for I don't know how long, until what he called "those damned lawyers" told him to either hang it or lose his contract to carry their brand.

He was even more cantankerous after that. In not too long a time he switched to Quaker State. Which then became Pennzoil and then Shell.

Dan....During the 1980's, I worked on a couple of Sea Otter projects in and around Prince William Sound. PWS is an amazing place...one of my favorites on earth. Anyhow, I was asked to help out in the capture/recovery of the sea otters that were exposed to the oil during the Exxon Valdez Oil Spill in 1989. Those 6 months out on water and at the rehabilitation centers changed my life. The smell of the oil out on the water. The many...many different types of aquatic life that were killed by this oil. I had worked on a few other sea otter projects on PWS in the early 80's. It was amazing...the waters so clear...the beaches pristine..no dead marine life. We must never forget how fragile our planet can be.....btw..the captain of the Exxon Valdez passed away last week.

Thanks for sharing, Jeff.
Theresa