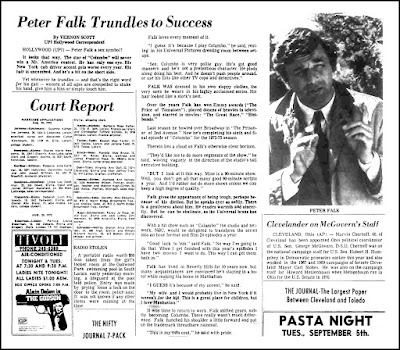 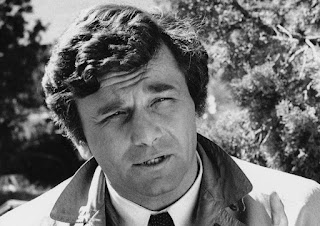 Fifty years ago, the wildly successful Columbo TV series, starting Peter Falk as the rumpled detective in the raincoat, was about to start its second season on NBC.

Above is an article that ran in the Journal on September 4, 1972 promoting the show.

Columbo was one of several segments that were in rotation to make up The NBC Mystery Movie, so it wasn't on every week. I remember being disappointed turning in expecting to see the show, only to discover that McCloud (with Dennis Weaver) or McMillan & Wife (with Rock Hudson and Susan Saint James) were on instead. Needless to say, I don't think I ever watched an episode of either of those two segments. (I might have given Hec Ramsey a chance as it was based in the Old West.)

It's hard to minimize the cultural impact that Columbo had, with the character earning top-of-mind awareness with the public. With the success of the show, many comics and impressionists added Lt. Columbo to their repertoire, and Peter Falk enjoyed many more film opportunities.

A revival of the series in 1989 wasn't as successful. I remember tuning in to the first new episode, thinking, "Hmmm.. Not good." Falk was just a little too old, playing the character too differently from the first go-around in the 1970s. Plus, it wasn't believable in 1989 that he would still be a lowly lieutenant after he had already become a legend in the Los Angeles Police Dept. in the original series.

Anyway, if you are a big Columbo fan, be sure to visit the very best best blog dedicated to the Lieutenant: The Columbophile Blog. It's the most comprehensive study of the character online, with episode reviews, trivia, analysis, and just about anything you can think of. Best of all, it's extremely well-written and funny too. Plus the blogger has just published a book as a companion to the blog. (Not a bad idea!)

By the way, COZI TV airs two episodes of Columbo every Saturday night, beginning at 8:00 PM.

FUN FACT: The character Colombo first appeared on a 1960 episode of "The Chevy Mystery Hour", entitled, "Enough Rope", and was portrayed by Bert Freed.

Yes....Bert Freed was also the guy in the classic 1971 movie "Billy Jack".He was in the famous scene where Billy Jack said that he was going to "Take this right foot and whop you on that side of your face."And Billy proceeded to do just that.