Once of the nice things about living in Lorain County is the fact that fresh produce stands are only a very short drive away – making us fairly spoiled, knowing we always have access to farm-fresh fruit and vegetables. As a kid growing up on the west side of Lorain, I was very used to seeing stands on State Route 254 as we drove to the cemetery, or O'Neil - Sheffield Center.
One of those stands was the one run by the Borman family, which is featured in the photos above, which appeared in the Journal back on August 29, 1972 – fifty years ago. Mrs. Mary Borman is shown in the photos weighing some produce for a customer.

The land is still in the hands of the Borman family today. The produce stand is still there along Cooper Foster Park Road, a comforting sight showing that not everything has to change over the decades. 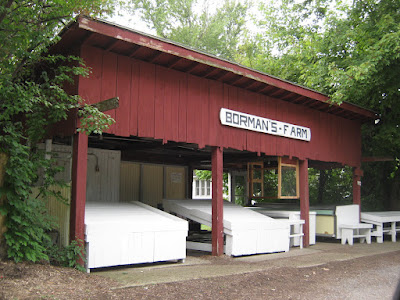 We used to shop at a produce stand on Rt. 58 just outside of Oberlin, run by a husband and wife. I remember that her name was Betty, but I don't remember his, or their surname. We went to Oberlin every weekend to see relatives, and we always stopped by the stand during the season. My favorite was the strawberries.