Hopalong Cassidy Rides Off Into the Sunset – Sept. 1972

Back in the days when kids enjoyed playing cowboys and Indians, every generation had its favorite straight-shooting actor who sat tall in the saddle.

My father (born in the early 1920s) liked Tom Mix. He even saw him and his horse, Tony, when he made a personal appearance in Lorain.

Although I have very early memories of watching Roy Rogers' TV show in reruns, my brothers and I were big fans of John Wayne throughout the 1960s. My parents took us to all of his new cowboy movies from about 1967 until the early 1970s.

But there was one cowboy who ruled the TV and radio airwaves in the early 1950s, thanks to his remarkable savvy and foresight in buying his old films and selling them to NBC to show on the new medium of television: William "Hopalong Cassidy" Boyd.

It was fifty years ago this month that "Hoppy" passed away. Below is the article about him that appeared in the Journal back on September 14, 1972.

It's a great article that examines his extraordinary popularity. It notes, "There have been 16 different Tarzans, six Lone Rangers, two Supermen, three sets of Batmen and Robins and a litter of Lassies.
"But there could be only one Hopalong.
"Boyd's portrayal of Hopalong –  a "good guy" who wore a black hat but was a paragon of virtue – was the longest-running characterization in Hollywood history.
"Boyd rode the range on his horse Topper for a quarter of a century in movies and on television.
"Hoppy," a character half conceived by writers, half by Boyd, didn't smoke, drink, swear or kiss girls. He captured villains rather than shoot them."
Boyd had a funny philosophy about his screen image. He observed, "When you've got kids looking up to you, when you've got parents saying what a wonderful guy Hoppy is, what the hell do you do? You have to be a wonderful guy!"
And it sounds like he was. 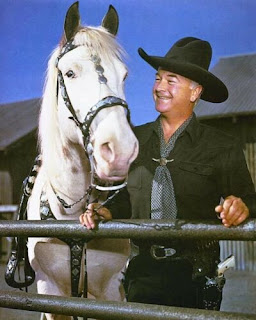 Western heroes like Hoppy gave kids a sense of right and wrong, something that seems to be lost. Here's to William Boyd, Gene Autry, Roy Rogers, Clayton Moore and Jay Silverheels, Guy Williams, and every cool cowboy who rode the Justice Trail!

And don't forget Red Ryder and his sidekick Little Beaver.Who was played by a very young Robert Blake.

I wanted to be a cowboy when I was little, until I found out I had to wear glasses.

No Real Cowboy Ever Wore Glasses. EVER!

So... I became a (mad) scientist, instead, since they ALL wore glasses.

Heaven only knows how my life might've turned out had there been one TV Cowboy with specs.

And, by the way, a perfect example of how children process media and why characters in media should be diverse. Seeing somebody like you can make a heck of a difference!