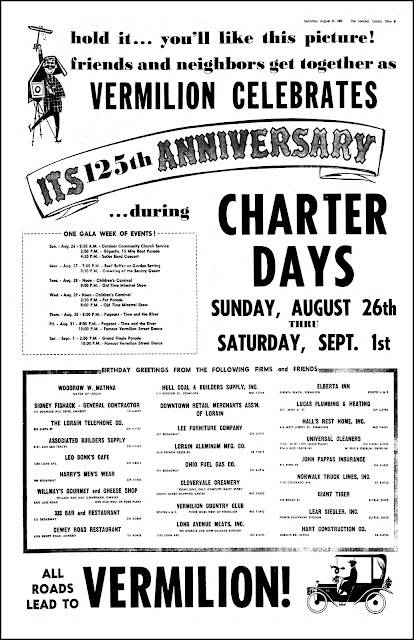 Sixty years ago this month, the city of Vermilion (where I currently live) was wrapping up its big week-long 125th Anniversary celebration, designated as Charter Days. Vermilion was incorporated as a village in 1837.

Above is the full-page ad that ran in the Journal on August 25, 1962 promoting the big event, which included a boat parade, the crowning of a beauty queen, a children's carnival, an old time minstrel show, a pet parade, a pageant, a street dance and a grand finale parade.

On September 3, 1962 the Journal ran the small selection of photos shown below, signifying the end of the celebration. 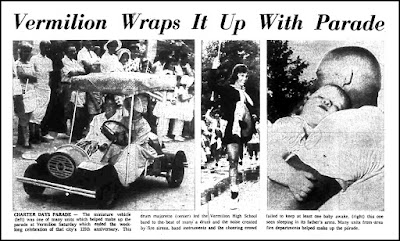 I'm not sure if Vermilion acknowledged the 175th anniversary (which would have been in 2012). The 200th celebration is still quite a ways off, in 2037.

I grew up in Vermilion in the 60s and 70s. What a wonderful place to grow up. Even though I have lived just outside of Memphis since 1980 I still think of Vermilion often. My dad worked and retired from the Lorain Ford Plant. It was sad to me when it closed. Now Ford is building a $5.8 billion plant near here to build electric vehicles.
Thank you for making me think of my former hometown today.