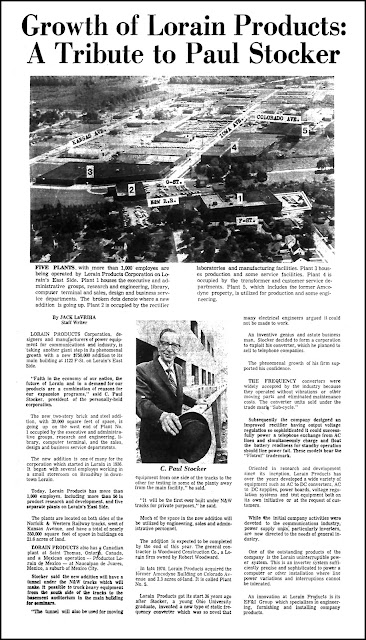 Although while growing up I was aware of Lorain Products Corporation, located on the east side of Lorain, I never really understood what the company produced.

I guess I should have read the above article, which appeared in the Journal back on September 10, 1972. At that time, the company was adding a new addition to its main building on F Street. C. Paul Stocker, president of the corporation, is quoted in the article, saying, "Faith in the economy of our nation, the future of Lorain and in a demand for our products are a combination of reasons for our expansion programs."

The article notes, "The new two-story brick and steel addition, with 30,000 square feet of space, is going up on the west side of Plant No. 1 occupied by the executive and administrative groups, research and engineering, library, computer terminal, and the sales, design and business service departments.

"The new addition is one of many for the corporation which started in Lorain in 1936. It began with several employees working in a small storeroom on Broadway in downtown Lorain.

"Today, Lorain Products has more than 1,000 employees, including more than 50 in product research and development, and five separate plants on Lorain's east side.

The article reveals a little more history of how Stocker started the company. It notes, "Lorain Products got its start 36 years ago after Stocker, a young Ohio University graduate, invented a new type of static frequency converter which was so novel that many electrical engineers argued it could not be made to work.

"An inventive genius and astute business man, Stocker decided to form a corporation to exploit his converter, which he planned to sell to telephone companies.

"The frequency converters were widely accepted by the industry because they operated without vibrations or other moving parts and eliminated maintenance costs.

"Oriented in research and development since its inception, Lorain Products has over the years developed a wide variety of equipment such as AC to DC converters, AC to DC supplies, power boards, voltage regulation systems and test equipment both on its own initiative or at the request of customers."

And Plant 1 is scheduled to be demolished sometime in the near future.on Lorain's Eastside.I have driven by there and practically every window is busted out.But what would you expect from a vacant building built right by the railroad tracks?And another piece of Lorain history is forgotten about.

My grandfather worked closely with Paul Stocker for many years. He retired from Lorain Products in 1976 but tinkered with electrical equipment for the rest of his life. I remember seeing Flotrol rectifiers in his basement workshop.

I've worked in that business under many owner for over 43 years. Still work in plant 3 today, are far cry from the business it once was

I've worked in that business under many owners for over 43 years. Still work in plant 3 today, are far cry from the business it once was

I worked as an installer for them from 1999 to 2003 when it was Marconi. Marconi ran it in to the ground. The benefits were fantastic, but they tried to expand too much. When the dot com bubble burst, they were in trouble. I was laid off, then rehired as a contractor, without all the benefits. Did that for a few months and then walked away. Too bad, as I enjoyed the job.