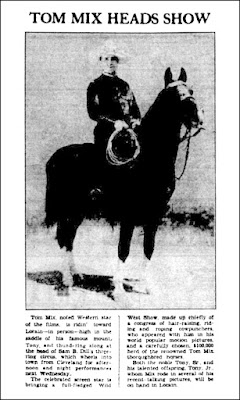 Did you know that a big screen movie cowboy once paid a visit to Lorain?

It's true, pardner – but no, it wasn't John Wayne. As the article above (which appeared in the Lorain Journal and Times-Herald on Friday, May 18, 1934) notes, Tom Mix came to Lorain as part of Sam B. Dill's three-ring circus by way of Cleveland on May 23, 1934.

Tom Mix had been a real cowboy, working on ranches in the Oklahoma Territory (according to this Wiki entry). One of the ranches where he worked had its own Wild West show. Tom Mix appeared in it, demonstrating his skills as a horseman and expert shot.

He began his silent film career in 1909, and continued to make more than 160 cowboy films throughout the 1920s. His horse Tony became just as well-known.

Tom Mix appeared in a handful of talkies, but due to injuries decided to wrap up his movie career. That's when he decided to launch a new endeavor.

According to the book The Amazing Tom Mix: The Most Famous Cowboy of the Movies by Richard D. Jensen, Tom formed a circus act called the Tom Mix Roundup and signed up with the Sam B. Dill Circus in January 1934. His troupe (consisting of Tom and his wild west cowboys and rodeo clowns) gave its first performance on April 20, 1934. Consequently, the show was still pretty new when it appeared in Lorain in May 1934.

Tom Mix later purchased Sam Dill's circus and operated it himself for a few years.


****
My father was a big Tom Mix fan, which makes sense to me now since he was born in 1921. Plus, his father operated the Dreamland Theater for several years in the 1920s, so Dad spent many Saturday afternoons watching movies.

Dad told me once that he had seen Tom Mix and his horse Tony when he appeared in Lorain. Perhaps he caught this May 1934 show.
Posted by Dan Brady at 6:33 AM

In approximately 1980 my wife and I were on vacation in southern Arizona, and were driving from Tucson to Phoenix. We made the trip on an old scenic route now bypassed by the interstate. We were enjoying the drive through basically undeveloped desert near the town of Florence Arizona when we came to a sign which read Tom Mix Wash and Monument ahead. We decided to stop and see how Tom Mix was related to this bit of desert in the middle of nowhere. Turns out that he was killed in an auto accident at this wash while driving to Phoenix in 1940. Looking around at the miles of desert in all directions we concluded that this was an appropriate spot for an old cowboy to end his days -- but in a car and not on a horse?