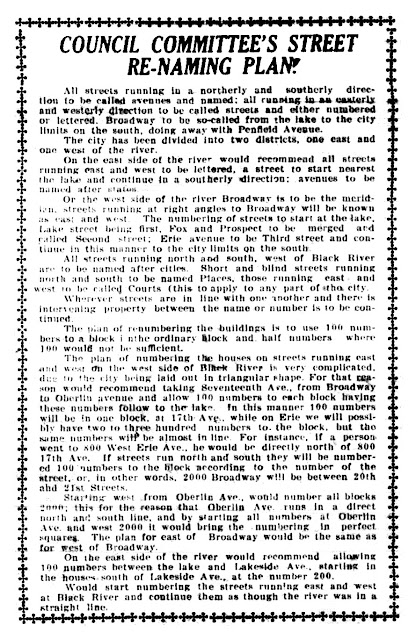 A few days ago, I mentioned that in the early 1900s, most of Lorain's streets were renamed. Well, above you see the newspaper announcement explaining the renaming proposal, which was included in a report submitted by a special council committee. It ran on the front page of The Lorain Daily News on Tuesday, May 19, 1908.
An adjoining article explained that the report "consists of a complete plan for the renaming and numbering of the streets of the city and is the outcome of long and careful consideration on the part of the committee." It noted that the proposal combined suggestions from council as well as civic bodies in the city.
The article also noted that "a large amount of special legislation would be necessary before the plan can go into effect and as planned now it will not be operative before January 1, 1909."
Of course, such a major undertaking was not going to be implemented without complaints.
A July 21, 1908 article on the front page of The Lorain Daily News was entitled STRONG OBJECTIONS VOICED TO STREET RENAMING PLANS. It noted that at the previous evening's council meeting, "the scheme at once met with considerable opposition and it is doubtful if the present plan will ever be adopted." It also stated that some parts of the plan "were condemned by members of the council and by Postmaster Bowman."
It appears that most of the objections were related to the changes that would occur on the east side of Lorain. The plan was for all streets running east and west were to be called "streets" and named for letters of the alphabet, and for streets running north and south to be called "avenues" and named after the states. Thus First Street would be known as Kansas Avenue and Second Street would become Iowa Avenue.
Councilman David Hatt objected, stating that "he saw no improvement over the present plan and that he did not see why Ohio Avenue was any better than Fifth Street as it did not tell him any more or as much."
"It looks more like a geographic contest to me than a street renaming plan," he stated.
The Postmaster – understandably – wasn't crazy about the proposal either.
According to the article, Postmaster Bowman "led the most opposition to the system" and said that it "was so faulty that if adopted it would mean much delay in the mails to the detriment of all."
Although the plan was referred back to committee, it appears that most of the proposal was eventually adopted.
It was a pretty incredible undertaking if you think about it.
Councilman Hatt certainly had a point. I lived on the east side of Lorain in the 1990s and street names always seemed like a mishmash to me – a mixture of selected states, some letters, presidents, cities and other miscellaneous monikers.
For me, though, the worst part of the renaming "scheme" is that it sure has made it more difficult to research specific addresses from the 1890s forward!
Posted by Dan Brady at 5:36 AM

That is why I grew up on New Mexico Avenue, as a kid I thought Avenue was classy. But where did Euclid come from?

That's a good question--same with Day Drive (which I still associate with Parma because of Channel 43's Day Drive address!)

Hi Dan, You probably have seen the "Old and New" The Streets of Lorain booklet that is sold at the BRHS. And, they also published "The New Names of Lorain Streets" Supplement to the Lorain Times-Herald, Sat. July 24, 1909. Is that where you also got some of your material?

I've never seen those but they sound pretty good. Once the BRHS is open to the public again (early April) I'll no doubt be in there at some point and will check them out--thanks.

A few years back I got in contact with the ational archive center (or what ever it called), in Washington, the sent me a photo copy of old Lorain before the steel mill was here, and before Am Ship was here. Talk about screwed up street names! Alo just north of Am Ship, along the east back of the river was a sort of swamp/ swiming area, that was a surprise. I still have the map, if you want a copy, it should be in my note book between a plastic slip cover.