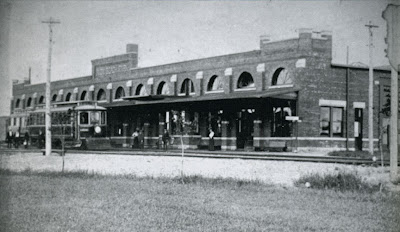 Here's another photo that I scanned from the Lake Shore Electric Railway book. The book's caption reads, "This photograph, taken in 1898 at the Beach Park station, shows an L&C car heading west to Lorain. In 1898, this was an L&C property." (The L&C that the book refers to is the Lorain and Cleveland Electric Railway.)

The book also points out that the L&C built a car barn, a powerhouse and a resort area at Beach Park.

Of course, you and I recognize the above structure, as it later became the old Saddle Inn at the Avon Lake shopping center on Lake Road, and housed the much-missed Avon Lake Theater.

The building is now part of the Avon Lake Artstown plaza complex, also housing the Casita Del Lago restaurant as well as the Tailgators Sports Bar. Here is a recent view (click on it for that "you are there' feeling). 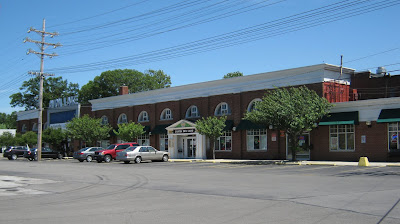 (I have a special feeling for the far right portion of the building that is now the sports bar. In the 70's, it was the Chef Henri Party Center, and I played at several weddings there as part of a local dance/polka band called the Four Links!)
Posted by Dan Brady at 9:15 PM