On June 12, 1957, the Cedar Point Causeway opened, effectively replacing the Chaussee as the preferred way to get to the park. Visitors to Cedar Point pay a toll to cross Sandusky Bay.
Here is an aerial photo, also from the Arcadia Publishing Images of America book on Cedar Point and credited to the Cedar Point archives. 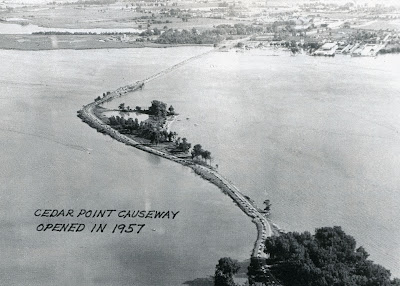 During the years my family made its annual trek to Cedar Point, we usually took the Chaussee, or the "back way" as my parents called it. There never seemed to be that much traffic on it that I can remember, and it was interesting looking at the homes and cottages along the narrow road. Plus it was particularly exciting when the park finally loomed into view at the end!
Going home after a day at the park, we would take the Causeway. My guess is because it was often difficult to navigate the car over to the Chaussee route when the park had cones and signs directing you the other way. While on the Causeway, Dad would play around by turning his headlamps off to plunge the roadway into total darkness for a few seconds, and my siblings and I would all shriek, knowing there was water on both sides of the road!
Despite the popularity of the Causeway, the Chaussee is still in use, although it is no longer promoted with signage. Here is a photo of the Route 6 entrance to the Chaussee today, as you approach from the east. 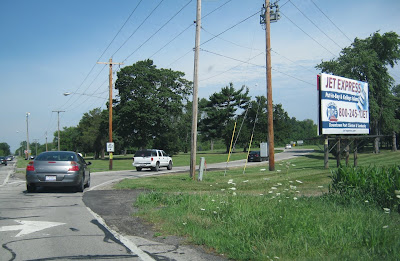 As you can see, there is no sign indicating that it is the way to Cedar Point. Quite a difference from the way it used to look in this postcard! (Below) 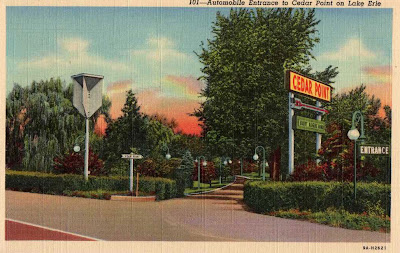 Anyway, back to the present. If you do turn in to the unmarked Chaussee entrance shown in the above photo, after a few hundred feet you are greeted with this sign. (Click on the photo.) 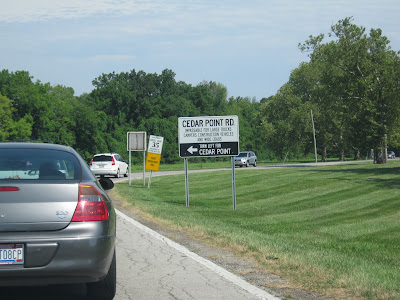 The sign basically hornswoggles you by telling you to turn left to go to Cedar Point (forcing you south back to Route 6), instead of turning right to take the Chaussee!
Meanwhile, remember the original, abandoned 1914 Chaussee entrance that was further east? Well, you can still take that road today, although on foot. How can that be? Read on!
In 1954, Dr. Dean Sheldon, a Sandusky obstetrician, purchased the 54-acre tract that included the original 1914 Cedar Point road for use as a family retreat.  He was a dedicated conservationist who built a cabin on the site, but otherwise left the land undisturbed so as to attract birds and other wildlife. The state of Ohio purchased the property from Dr. Sheldon’s estate in 1979, and today it is part of the 465-acre Sheldon Marsh State Nature Preserve.
According to the Ohio Department of Natural Resources, the Sheldon Marsh State Nature Preserve is important because it is one of the last remaining sites where undeveloped coastal beach turns to marsh. The preserve is also a critical stopover for migratory birds, and consequently is known for providing excellent bird watching opportunities. More than 300 bird species have been identified there.

The 1914 roadbed itself, which previously carried Model T's to a day of fun at Cedar Point, now carries foot traffic and looks like this. 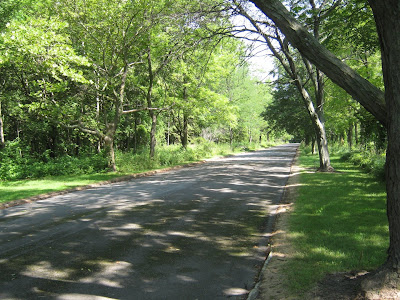 Also of interest to those who walk the trail through the preserve today is a NASA pump station located at the northern end of the road. It was originally built in 1941 to provide water for the manufacturing of munitions at the Plum Brook Ordnance Works.
As a tribute to the preserve’s origin as part of the first Cedar Point road, the original brick pillars and iron gates have been recreated near the entrance. They look like this from Route 6. 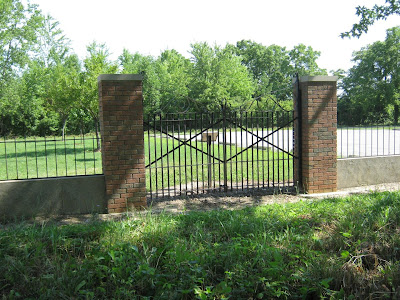 Nearby, a historical marker erected by the Erie County Historical Society commemorates the important role that the road played in the development of Cedar Point. 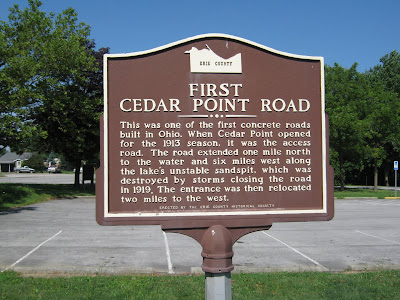 What great old times and what a wonderful feeling it always was to turn onto that road, which of course we never knew was called the "Chausee". It was probably the most wonderful -- but also the longest-- road there ever was. I can remember wondering what it was like to live with your own beach, and how wonderful it must be to live so close to Cedar Point! But also you entered a kind of time warp, where the Space Needle never seemed to get any closer... the road just went on and on forever until you suddenly made that last turn and there was the parking lot!

We went out there four or five years ago (maybe longer), and I noticed that there were still a lot of familiar things, though they did not seem to be in the same places. What I liked the most was that there was still a lot of the 1890's flavor that I remembered from when we were kids, especially in the music being played all around-- marching band music, old timey stuff-- until about 3pm when suddenly everything went modern!

Nothing could ever be as wonderful as it was when you were a kid, I know. One of the things I always liked best about Cedar Point is that it was the only amusement park other than Busch Gardens where you could buy a beer out on the fairway. I hope thats still true. You can't even find that in Texas!

great work on this. i've been traveling that roadway for decades to our family homestead and wondered the history. i shot some recent video that only goes from the cleveland road to about the 1100 block but gives a perspective that confirms the beauty. thanks!

During the 1940's my family bought a two-story "cottage" about mid-way on the Chaussee. As I recall, it was the only place wide enough along the Chaussee that our house and that of a neighbor couldn't be seen from the road. We posted a sign on the telephone pole at the road which read: Here We Are. That marker alerted friends who came to visit. But nearly every weekend a car headed to Cedar Point or returning to the main highway would get stuck in the soft sand shoulder along the road. And that sign usually led the stuck driver to our door and members of our family would go out to the road and help shovel and push the car out of the sand. Our cottage faced Sandusky Bay, (Lake Erie was across the road) and we had a small dock from which my dad liked to fish. The water was so shallow that once my cousins and I were out in a rowboat that tipped over because we were horsing around. My dad, sitting on the dock, thought we'd all drown. But instead we water-jogged back to the dock, pulling the boat back with us. The water came only to our waist. About 20 years ago I took a sentimental journey back along the Chaussee to see our old summer place. I was sad to see that what had been a wide beach back in the 40's had eroded greatly. But down near Cedar Point, developers apparently had filled in part of the Bay area near the end of the Chaussee, because there were actually streets and many homes built there.

I took the Chaussee into Cedar Point once, although I didn't know that's what it was called at that time. Looking on google maps at the cedar point/sandusky area, I noticed how there was this road a ways east of cedar point that goes north from 6 out into the lake, and then turns west into cedar point. We called it the "scenic route" when we traveled it. I thought it was neat going that was through the swampland and then by all those houses. Nice to know some of the history now.