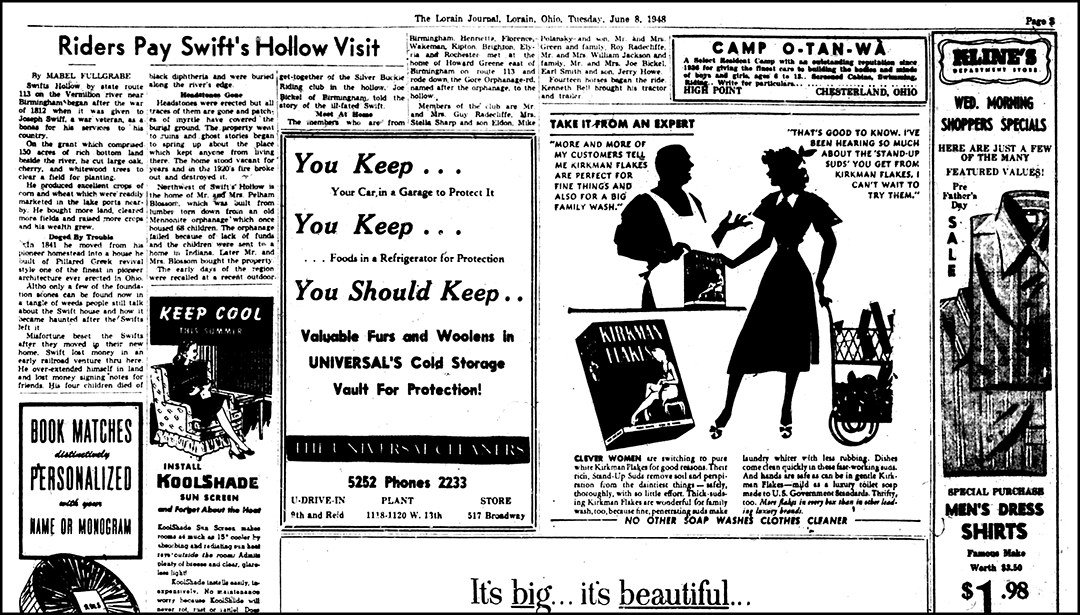 Here's an interesting article that ran in the Lorain Journal on Tuesday, June 8, 1948. It's about a visit that the Silver Buckle Riding Club paid to the Swift House ruins, and provides a nice, capsule history of the place.

Swifts Hollow by state route 113 on the Vermilion river near Birmingham began after the war of 1812 when it was given to Joseph Swift, a war veteran as a bonus for his services to this country.

On the grant which comprised 150 acres of rich bottom land beside the river, he cut large oak, cherry, and whitewood trees to clear a field for planting.

He produced excellent crops of corn and wheat which were readily marketed in the lake ports nearby. He bought more land, cleared more fields and raised more crops and his wealth grew.

Dogged By Trouble
In 1841 he moved from his pioneer homestead into a house he built of Pillared Greek revival style, one of the finest in pioneer architecture ever erected in Ohio.

Altho only a few of the foundation stones can be found now in a tangle of weeds people still talk about the Swift house and how it became haunted after the Swifts left it.

Misfortune beset the Swifts after they moved in their new home. Swift lost money in an early railroad venture through here. He over-extended himself in land and lost money signing notes for friends. His four children died of black diphtheria and were buried along the river's edge.

Headstones Gone
Headstones were erected but all traces of them are gone and patches of myrtle have covered the burial ground. The property went to ruins and ghost stories began to spring up about the place which kept anyone from living there. The home stood vacant for years and in the 1920's fire broke out and destroyed it.

Northwest of Swift's Hollow is the home of Mr. and Mrs. Pelham Blossom, which was built from lumber torn down from an old Mennonite orphanage which once housed 68 children. The orphanage failed because of lack of funds and the children were sent to a home in Indiana. Later Mr. and Mrs. Blossom bought the property.

The early days of the region were recalled at a recent outdoor get-together of the Silver Buckle Riding club in the hollow. Joe Bickel of Birmingham told the story of the ill-fatted Swift.

Meet At Home
The members who are from Birmingham, Henrietta, Florence, Wakeman, Kipton, Brighton, Elyria and Rochester met at the home of Howard Greene east of Birmingham on route 113 and rode down the Gore Orphanage-rd, named after the orphanage, to the hollow.

Fourteen horses began the ride. Kenneth Bell brought his tractor and trailer.
Posted by Dan Brady at 6:44 AM

Dan,
I finally read all of your blog regarding the "Gore Orphanage". A very well written piece. Thanks for all that you do to keep the history of our little slice of the world accurate and alive. I very much enjoy your blog.

I would caution readers that the general area there does have a history of odd occurrences dating back before the white man, and that such things are best left alone. Enjoy the scenery, the wildlife, the architecture when found, but don't try "calling up" anything.