Back in early October 1930, Sheffield Lake was getting ready for a fund raiser for their fire department, to be held at the Cleveland Beach Dance Hall. Here's the story as it appeared in the Lorain Journal, October 3, 1930.

SHEFFIELD LAKE, Oct. 3 – Paralleling the old phrase, tomorrow is the time for all good Sheffield Lakers to come to the aid of their fire department.

Officials in charge of the first community carnival, to be held Saturday afternoon and evening at the Cleveland Beach dance hall, are certainly looking for a record crowd.

All week the dance hall and adjoining buildings have been echoing with the sounds of hammer and saws while booths and various accessories have been erected for the carnival.

Tonight everything is practically in readiness, and nothing has been left undone to make the affair a success.

In addition to these things, a beauty contest, a flower show, a pet show, a baby show, and any number of other features have been arranged.

Climaxing the evening will be old-fashioned and modern dancing until a late hour.

Of course, there will also be the usual "grand prizes"given a way as an added incentive.

Anyway, a cracking good time is promised to all, and village officials haven't even the slightest idea how many will turn out for the carnival.

Proceeds will go to the fire department to pay for new alarm apparatus – and if there is enough left, to buy a resuscitator, which is badly needed but has been too expensive.

What interested me in this article was the fact that the carnival was held at the Cleveland Beach dance hall – a favorite research topic of many local history buffs.

The Cleveland Beach dance hall was located where Tennyson Elementary School is today in Sheffield Lake, just a short distance from Lake Road. The official stop on the Lake Shore Electric Railway was Stop 83.

The Cleveland Beach dance hall was actually a barn that had been converted for use as a dance pavilion, and it was a popular place for local bands to perform.

For many years during the 1920s and 30s, Decoration Day (today's Memorial Day) was the traditional opening day for local dance halls from Cleveland to Sandusky, and the newspapers were full of their ads around that time. It's easy to find old ads for the Cleveland Beach dance hall mixed in with other local resorts.

Here are two from May 1928 (below). WHK Radio artists Stan Wood and his Pirates were performing. 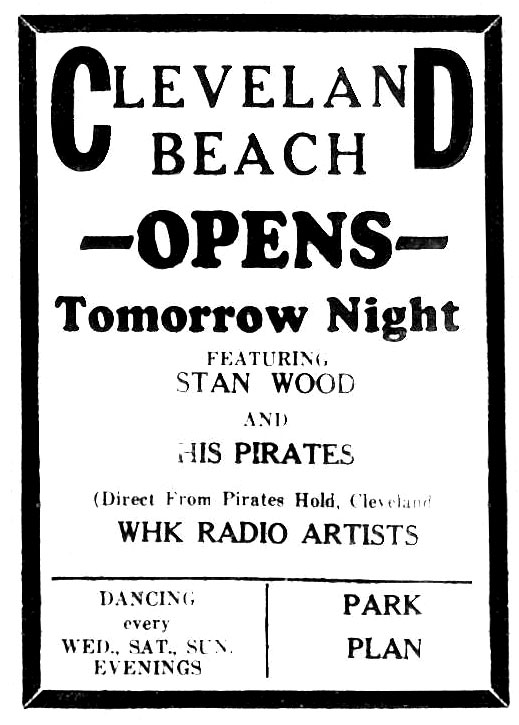 Here's another ad, this one from May 27, 1931 (below). Sammy Gerace and his Orchestra were featured. The dance hall was used for a variety of purposes. In 1942, the Sheffield Lake Civic Club sponsored bingo games there to raise funds for civilian defense, according to an article in the July 4, 1942 Billboard. And according to the July 3, 1943 Plain Dealer, the dance hall was put to use as the location of an assembly line, "producing 3,600 victory garden dusters for the American Specialty Co. of Amherst." (The American Specialty Company manufactured a variety of products for food growers, packers, shippers and processors, as well as labor-saving products for the home.)
Finally, in September 1945, the Sheffield Lake Board of Education purchased the Cleveland Beach dance hall and property for use as the location for a new school. A public auction to sell the building was scheduled for October.

The October 11, 1945 Chronicle-Telegram included an advertisement for the auction. It read, "The undersigned will sell at Stop 83, 350 feet south of Lake Road, corner of Kenilworth and Hawthorne Ave's., in Sheffield Lake Village on Wednesday, Oct. 17, at 6:00 P.M. the following described building, not including the land; Located in Sheffield Lake Village and known as part of Cleveland Beach allotment, being a large wooden building, approximately 50x100 feet and having been used as a dance hall, known as the Cleveland Beach dance hall. The lumber and installations of this building are in very good condition and the purchaser will be given ample time to take apart and remove. If you need building material now or in the future this will be an excellent opportunity to get it. Don't miss this chance. TERMS: CASH and building will be sold to the highest bidder.
According to an article in the Summer & Fall 2013 issue of the Village Pioneer, the dance hall was purchased by Nick Kelling. It was dismantled and moved to his farm at the northeast corner of Abbe and French Creek Roads, where it was once again put to use as a barn. Unfortunately, the building caught fire and burned in May 1955.
****
Drew Penfield (local historian and webmaster of the Lake Shore Rail Maps website (which has a whole section dedicated to Sheffield Lake here) has been looking for an vintage photo of the Cleveland Beach dance hall in its heyday for some time now. If you happen to know of a photo, please let Drew or me know!
Posted by Dan Brady at 6:25 AM