Here's a Halloween-themed ad for the well-remembered W. T. Grant Company (or just plain Grants) chain of dime stores. The ad ran in the October 28, 1964 Lorain Journal – 50 years ago today – reminding readers that they'd better stock up on candy – and get some costumes if they hadn't already – before the big day. 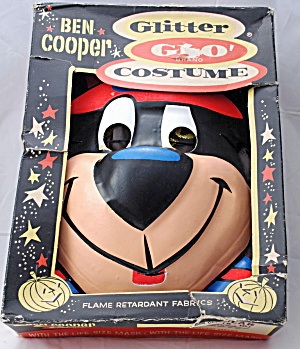 Lorain had several Grants stores, in the Lorain Plaza, Oakwood Shopping Center and Westgate Shopping Center. (I only remember going to the one at the Lorain Plaza, which was always fun and interesting – especially looking at the pet turtles for sale.) The Grants store in the Lorain Plaza appeared in the city directory until 1975; after that, the space went vacant until Revco moved in during the early 1980s. The space is still currently vacant since CVS built their own store at the former Willow Hardware location.

The Grants ad above is interesting in that the only licensed character costume is Yogi Bear  – a favorite of mine. The "smarter than the average bear" was introduced on The Huckleberry Hound Show in 1958, and had received his own TV show in 1961.

I supposed his visibility had received another boost in 1964, thanks to the release of his full-length movie Hey There It's Yogi Bear earlier that year.

I like that little witch icon done in the style of a child's doodle in the Grants ad. Apparently it was used on the Mars candy bar packaging that year, since it seems to be visible in the candy illustrations as well.

But what about the other costumes in the ad? 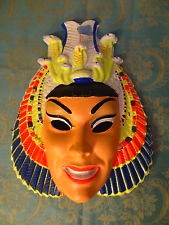 I finally figured out that the costume the young lady isn't wearing a princess mask – it's a Cleopatra one. (Of course, after I found the photo of the mask at left, I looked more closely at the ad and finally saw the word CLEOPATRA plastered in all caps across her costume.)

As for the generic Frankenstein monster outfit, I couldn't quite find an exact match. But here's a link to a great blog featuring a variety of vintage Ben Cooper monster costumes that probably includes the one shown.

And for a hilarious look at kid's Halloween costumes of the 1950s and 60s, click here to visit John Kricfalusi's blog.
Posted by Dan Brady at 6:23 AM

I just recently watched HEY THERE, IT'S YOGI BEAR! on tv; I remember going to the Avon Lake Theatre in '64 to see it.

Trick or Treat used to be such a gas.