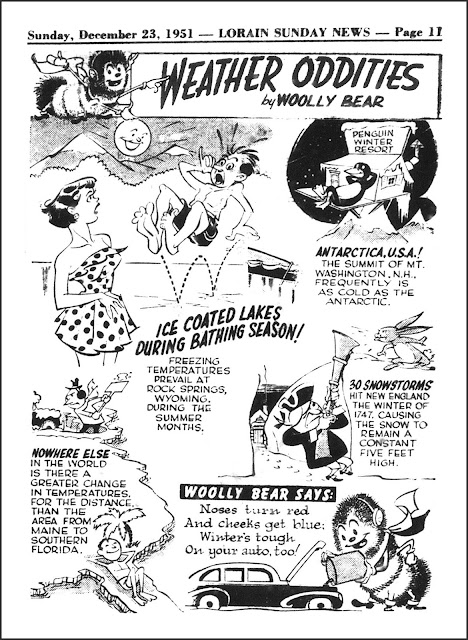 TV's Dick Goddard popularized the woolly bear caterpillar as a weather forecaster. But decades before that happened, the cartoon panel above appeared in the Lorain Sunday News on December 23, 1951, showcasing the fuzzy little worm.

It’s a cute series of vignettes, if you’re a weather junkie. I like that rabbit blowing a raspberry at the hunter. And note how the cartoonist slipped in a little bit of cheesecake.

I’m not sure if “Weather Oddities by Woolly Bear” was an ongoing syndicated feature or a one-shot panel. But this type of entertaining cartoon – similar to Ripley’s Believe It or Not! – certainly livened up newspapers back in their Golden Age.
Posted by Dan Brady at 5:39 AM

Also it turns into a moth.