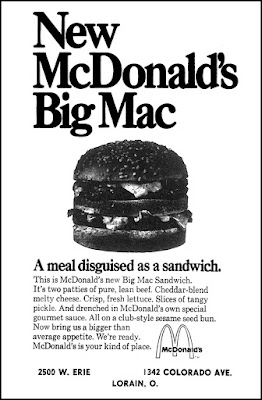 Fifty years ago, McDonald’s was rolling out the Big Mac nationwide.

Above is an ad that ran in the Lorain Journal on December 8, 1968, introducing the double-decker burger with special sauce to our area.

Obviously, the Big Mac was designed to compete with the iconic Big Boy. But while Big Boys were available only at sit-down restaurants (such as Manners in our area), the Big Mac was a “fast food” offering, which undoubtedly contributed to its popularity. 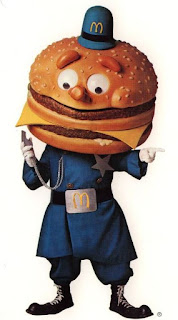 The Big Mac also became a character on the McDonalds TV commercials: “Officer Big Mac," the symbol of beefy justice.

You can read about how the Big Mac came to be created here on its Wiki page. Interestingly, the article points out that “Big Mac” was not its original name. “Aristocrat” and “Blue Ribbon Burger” were two names that failed with consumers during its early rollout.

Big Mac already had some competition in our area. The Midway Oh Boy sandwich – also inspired by the Big Boy – had already been around since 1953 in the Lorain County area. And the Sooper Hooper double decker burger was being served up at the Hoop Drive-in in the 1950s, until those restaurants became part of the Manners chain and Big Boys replaced them on the menu.

Nevertheless, the Big Mac has been one of the most popular and best-selling menu items in McDonald’s history. The classic sandwich is still quite wonderful in its simplicity; no bacon or artisan designation is needed.

And the restaurant chain did not let Big Mac’s 50th Anniversary go unnoticed this summer. As part of the celebration, McDonald’s gave away a special coin (a MacCoin, what else?) with the purchase of a Big Mac that could be redeemed for a free Big Mac at any participating location world-wide. Now that’s global currency.

You can read all about it here.

Sonic and Whataburger slam- dunk McDonald's all day, and twice on Sunday.

Man charged more than $1,000 for Burger King penny Whopper deal
Harvey said he then selected another deal but when he left, he said his jaw dropped when he saw that he was charged $1,093.91.
https://abc11.com/food/man-charged-more-than-$1000-for-burger-king-penny-whopper-deal/4871633/