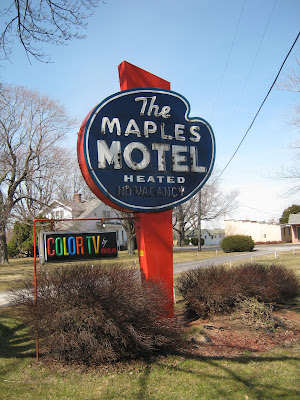 On many a Sunday drive, I've admired the sign for the Maples Motel on U.S. Route 6 just outside Sandusky. It's right where Perkins Avenue intersects with the highway by the railroad tracks.

A few weeks ago while driving to Sandusky to research an article for the Black Swamp Trader & Firelands Gazette, I finally pulled over and grabbed a shot. It's such a great sign.

The motel has its own website, which provides a little history of the place. Seventy years ago, the place started out by offering cabins to motorists seeking accommodations after a day of fun at Cedar Point. In the 1950s, the owners built the current motel, and retained a few of the cabins.

The Maples Motel is well-represented on tripadvisor.com. Most of its customers really love the place and its retro feeling, and come back again and again. The only negative seems to be its proximity to the railroad tracks.

The motel played a major role in a manhunt that took place back in August of 1960. Two escapees from the Soldier's Home reformatory honor camp held the motel's owners and family at knife point before forcing the son to drive them away in the family truck. The son drove them to Huron, and the escapees got off at the entrance to Huron High School. They were later captured in what was later described as the greatest manhunt in recent Erie County history, involving 100 officers and guards, as well as planes.

Anyway, it's nice to see a Mom-and-Pop motel – still in the same family after all these years – still thriving in the 2010s.
Posted by Dan Brady at 6:37 AM

Amoebas and pallets were big in those great old days