Groundhog Day Through the Years

I like Groundhog Day. It's a fun little break in the middle of cold, depressing winter.

The 1993 comedy with Bill Murray (one of my favorite movies) really raised the level of awareness and excitement connected with the holiday. The weather prediction from Gobbler's Knob seems to get coverage on even the most serious of news broadcasts, as well as widespread newspaper coverage.

Was it always like this? I hit the microfilm at the library to see what Groundhog Days of the past were like.

The first year I checked – 1942 – was kind of interesting. We were at war, and thus everything was affected – even the Groundhog.

Here's the front page article from January 30, 1942 from The Lorain Journal and the Times-Herald, explaining why the Groundhog in Punxsutawney would be taking a break. 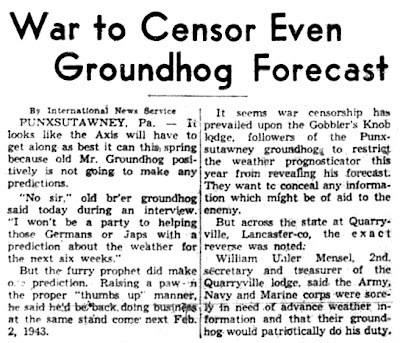 I didn't know there was a rival groundhog at Quarryville. I guess the poor guy needed a better agent.

During the following year, the Lorain newspaper apparently found another groundhog to interview. Joe Groundhog followed the lead of his cousin in Punxsutawney, and refused to report if he saw his shadow. As he stated, "Anything you write may be picked up by the fifth column and transmitted to the third Reich so you of the fourth estate had better be careful what you say in the first and second places." He added, "Wouldn't Hitler like to know whether we are going to have six more weeks of winter or not?"

Lorain's weather forecast for that Groundhog Day of 1943 was for slowly rising temperatures, after a noon reading of 24 and a high of 26.

In 1951, Lorain was in the middle of a cold spell (the overnight for Feb. 2 was predicted to be 5 below) but it was sunny. Thus the following article appeared on the front page of Groundhog Day 1951. 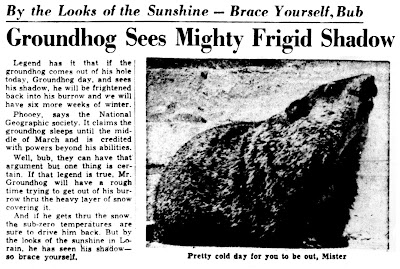 On February 2, 1952 the Lorain Journal sent a nameless reporter out to interview another local groundhog, and apparently the creature was in a cantankerous mood after being disturbed.

"Get your stinking foot out of my tunnel, Bub," the groundhog is quoted as saying in the amusing report. "You may be a newspaper reporter to some people but you're a pain in the neck to me. Why don't you go out and rake up a juicy murder or something instead of giving me a headache?"

The groundhog continued. "Ya wanta know about the weather? Sure. I'll tell ya. It's gonna rain, sleet, hail, snow, thunder, lightning and you're going to have tornadoes. Now are ya satisfied?"

The Journal did accompany their reporter's story with a small photo and caption of 'the Punxsutawney Groundhog' emerging from his home (below). 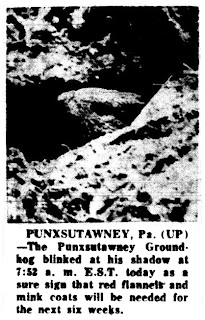 By 1962, the coverage of Groundhog Day was a little more restrained in the newspaper, and the Journal went with the straight wire report from Punxsutawney. 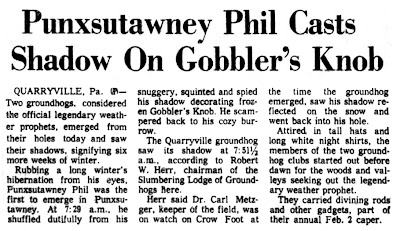 There's that groundhog from Quarryville again, mentioned in the article and muscling in on Phil's racket.

It turns out that Quarryville is still Pennsylvania's second major Groundhog Day center of celebration. You can read about here and here. They seem to really resent Phil's success.

Anyway, here is the link to the official Punxsutawney Phil website, where you can watch a webscast of the event. And, of course, here is Phil's Facebook page.

Have a great Groundhog Day!