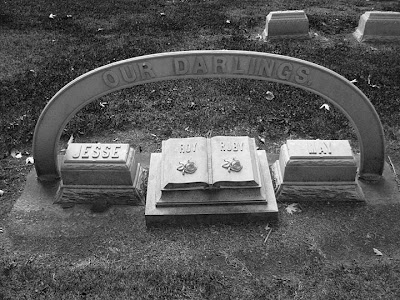 After Joseph Swift was forced to sell his mansion in the mid-1860's, the home fell into other hands. At least one other family owned it before it was purchased by the Nicholas Wilbur family.


Here is where it gets a little spooky. According to local historians, the Wilbur family were Spiritualists and as such believed that the dead could be contacted via séances. A brochure produced by the Lorain County Historical Society noted that "many wild and weird stories were told about the place during and after their occupancy. Along the river's edge were some neglected children's graves and their spirits were said to appear frequently at the séances held in the house."
In January 1893, tragedy struck the Wilbur family. During a diptheria epidemic, the Wilburs sadly lost four of their grandchildren in one week. Their graves are in the Maple Grove Cemetery on Mason Road. There are two monuments to the children, one with an arch inscribed "Our Darlings." (See photo.)
Despite the fact that the grandchildren did not die in the Swift mansion, their deaths apparently became associated with it anyway.
Wilbur himself died in 1901 and the Swift mansion became vacant again.
Next: the Orphanage
Posted by Dan Brady at 9:34 AM