As the year 1970 was drawing to a close, so was the era of the old Lorain City Hall.

Demolition was just beginning to get underway at the end of December, clearing the properties on the northwest corner of West Erie Avenue and Broadway so that a new City Hall could be built.

And according to the above photo and caption, which appeared in the Journal on December 30, 1970, one of the first buildings to come down was the old comfort station (or rest room, if you prefer).

What, you don’t remember it?

It was the small building just to the east of the old Lorain City Hall in this photo. The Civil Defense Tower was right behind it.

In this photo (below), it’s just to the west of the Dew Drop Inn. I guess someone thought putting a Marine recruiting poster in front of a public rest room was a good idea. 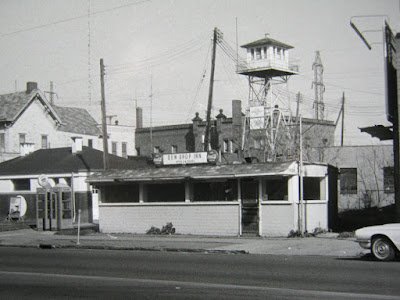 Anyway, back here is my post about where the comfort station was originally supposed to be located: across the street in the park.
Comfort stations must have been a popular concept for cities in the early years of the 20th Century. Vermilion still has its 1912 model on Liberty Avenue near Downtown (below). 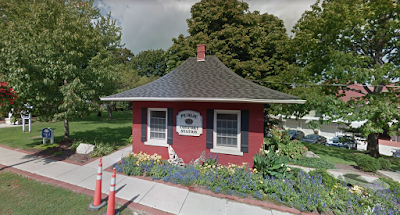 Hi Bill, thanks for pointing that out. I seem to remember seeing a vintage photo of it as the police station, probably on Rich Tarrant’s “Vermilion Views” website.

I remember that building, but I never knew what it was.

...I never realized what that building was! I always assumed it was a part of the store (can't remember the name) that was on the NW corner of Erie and Broadway.