Well it didn't take long for some more photos of the diner at 216 W. Erie to materialize. I spent a little time at the Black River Historical Society today, and came up with some terrific shots. Special thanks to Rodney Beals for digging them up for me.

The undated photo above shows that same building (that I circled in the previous post) when it was known as Helen's Diner, which was run by Helen Pecynski. She owned the diner from the late 1930's until the early 1950's.

Here's an undated photo provided by Dennis Lamont, showing the westbound Lake Shore Electric Railway car 182 whizzing by the diner (at the far right of the photo) and the city comfort station (the small building just to the left of the diner). 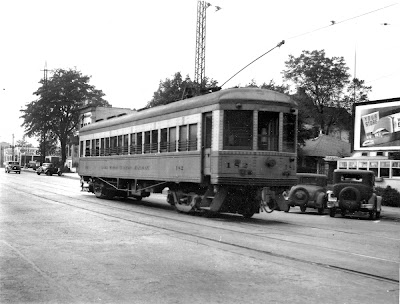 The first one shows the Dew Drop Inn and the city comfort station (rest rooms) still beside it. The diner has been quite modified. Also check out the old Lorain City Hall, the Police Station behind it, and the Civil Defense Tower! (Click on the photo for an enlarged view!) 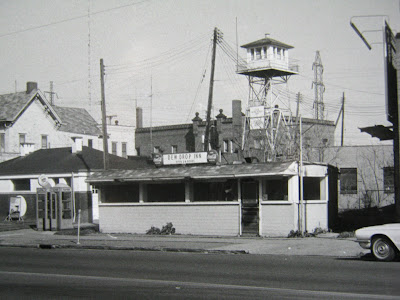 And here's the other shot from the Black River Historical Society's files, showing the Dew Drop Inn from the other direction. Remember the Northern Institute of Cosmetology beauty school just to the right of it – and those memorable faces peering down from the building? 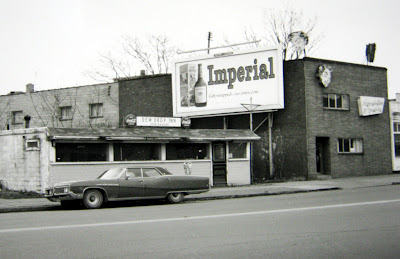 Seeing these shots really brings back a lot of memories!

And lastly, here are the 'then and now' shots of the area. It's already strange not to see the stacks of the Ohio Edison plant sticking up in the distance. 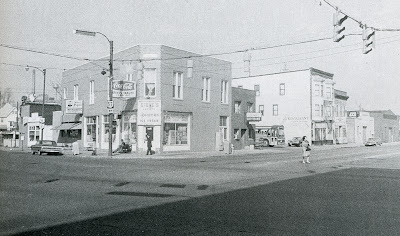 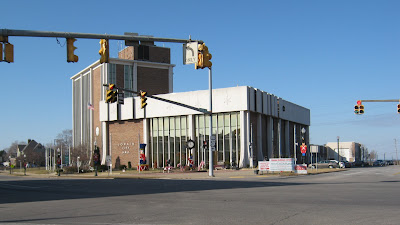 Pretty depressing to follow this thing down from its neat, pretty origin through its decrepitude until it disappears. Most telling is the shot of it, looking abandoned, with a junked-out Pontiac in front of it, liquor sign above. The Lorain of our teen years. (I don't know that I ever knew that there was a "city comfort station") In the original shot with the nice shrubbery and all, it looks like it was actually a dining car once, that eventually had a shell built around it. Anything about that in the microfilms?

You're right, Ken, that it looks like a real diner – and today I actually found a little bit of online info about it on a New York Diner website. As soon as I am done researching it, it'll show up as a post!