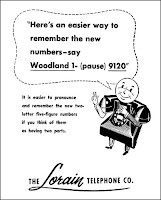 Back on November 13, I posted a Lorain Telephone Company ad from November 1956 (shown at left).

The ad presented a suggestion for remembering the new phone numbers made up of two letters and five numbers. The suggestion was to add a mental pause before the last four numbers.

I remarked that our two-letter prefix was AVenue.

My old Masson School classmate Mike Kozlowski remembered seeing ATlantic on his phone, which brought up a good question as to how the Lorain Telephone Company assigned these word prefixes.

So I went back to the Lorain Public Library to review some telephone books for the answer.

It appears that those little phone company buildings that are still seen around Lorain and the surrounding communities were associated with a specific telephone exchange.

Here’s the map that appeared on the front of the 1956 phone book, showing all of the various exchanges. 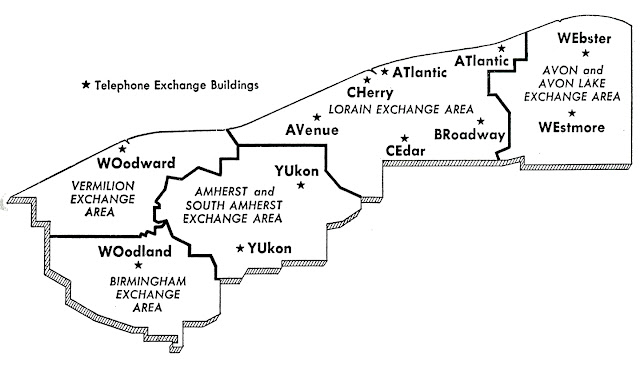 I think it would have been cool to have ‘Yukon’ as an exchange – as opposed to the more humdrum ‘Avenue.’
The 1956 book included a smaller map inside explaining how exchange areas could have five different exchanges (like Lorain) or just one (like Vermilion). I guess it was a geographic thing. 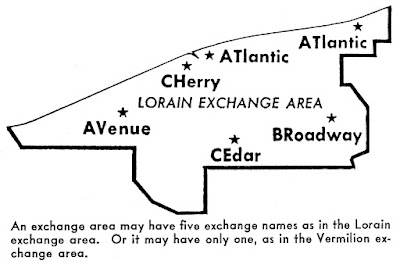 A post I did on a November 1963 Lorain Telephone Company ad included a map showing the various exchanges and their buildings. 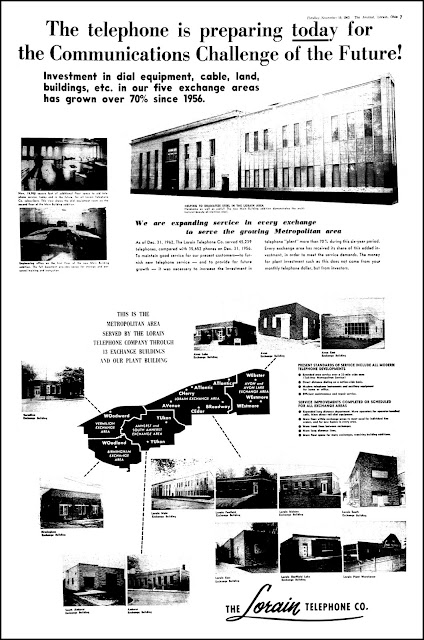 By 1968, the various exchange names were dropped and replaced by their corresponding numbers. Here’s the map from that 1968 edition. 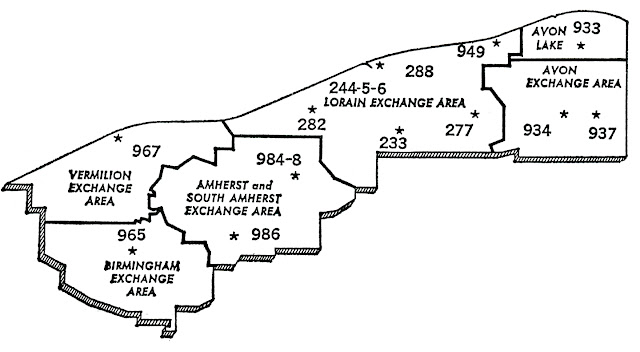 Looking back, I think those old exchange names had a quaint charm to them. Sometimes one could be dramatic as well, (such as the use of one in the title of the 1948 movie, Call Northside 777).

The passing of those telephone exchange names is one of those cultural changes, along with the elimination of home milk delivery, that helped signal the beginning of the modern era.
Posted by Dan Brady at 5:51 AM

Hi Dan - I am relatively new to this area. Is it true that prior to 1956, there were no exchanges? Did all calls outside, say, Avon/Avon Lake have to go through an operator? Thanks for any insight you have on this.

Great fan of your blog!

Glad you like the blog. Before the exchanges of the mid-1950s, there were just shorter numbers that you dialed yourself if the call was local.

As time went on, five-digit numbers were added. For example, in the 1939 directory the Pueblo's phone number is 63-596. One of its neighbors on the same side of West Erie had the number 2515, and two doors down another neighbor had the phone number 2415. So I think it might have depended on when you began your telephone service as to what kind of number you had originally.

Hi Dan, My in-laws lived right on the line between Sheffield township and Elyria. They had family and friends in Lorain and Elyria. Back then it was " Long Distance " to call Elyria from Lorain, so an extra charge was added. My in-laws had service from both Lorain Telephone Co. and Elyria Telephone Co. You could call from their kitchen to their dinning room, but it would cost you $1.00. Bill N.

Where was the Lorain Plant located? I know of all the sites in the Lorain/Amherst area except that one. I'm quite sure the Lorain South building was where the switch was for the ship-to-shore radio system that Lorain Electronics had running until the 90's.

Also, digging through your site has allowed me to survive very slow days at work. Your due diligence is very much appreciated!

Hi Alex,
Thanks for the nice comment. I'll see if I can come up with an address for the plant/warehouse on my next visit to the library.

I checked the city directories and in the 1912 edition, the list of phone numbers actually started with someone having "1." The numbers increased numerically. Phone numbers with three numbers were the most common. Many of these had a word prefix like 'MAIN.'

By 1915, phone numbers with four numbers were the norm.