Right after my post last week about the Adam Forepaugh and Sells Brothers Circus visiting Lorain in July 1901, I received an email from local historian and blog contributor Dennis Thompson. Dennis sent me a great vintage poster (above) announcing the impending appearance of the Cristiani-Wallace Brothers Circus in Lorain.

Dennis wrote, "Here is an old poster I found a few years ago featuring a circus at Kew Gardens. If you search for the circus name, you can find some information.”

Although there was a month and day (Wednesday, June 23) on the poster, there was no year. But after researching the circus, and knowing when the Kew Gardens project had come to an end, Dennis figured it out.

"June 23 was a Wednesday on 1948 and 1954, both too early for the circus,” noted Dennis. "Looks like they added the "Wallace Bros" in 1961 after the Kew Gardens were razed. I guess they used the empty lot, it would have been a good spot I think.

"Their 1962 and 1963 schedules are online but no Lorain. Nineteen sixty-five was another year when June 23rd was a Wednesday; that’s probably when they were there.”

Indeed it was 1965 when the circus came to town. A series of small ads in the Journal promoted its appearance, as well as several articles.
The first article (which ran June 21, 1965) revealed that the Lorain Youth Center – the organization that had brought the circus to town – had generously voted to a portion of the advance sale price of the tickets to the Carl Baker Hospital Fund campaign being staged by the Lorain Emergency Police. (Lorain Emergency Policeman Carl Baker had been shot the previous February during a robbery and the fund was set up to help him with the monumental hospital and surgical bills.) 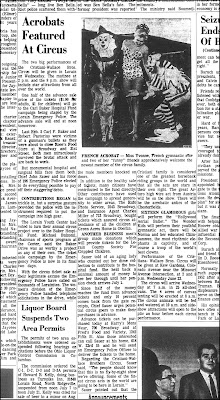 The article also provided a nice description of the circus, with Lorain Emergency Police Chief John Sauer noting, “Some of the finest circus acts in the world are going to be here in Lorain.”

A second article appeared on the front page on June 23, 1965, on the day of the circus – 52 years ago today. It provides some nice behind-the-scenes information about the circus. It had left Mansfield that morning and rolled into town around 7 a.m. By 8 o’clock all the tents had been pitched. 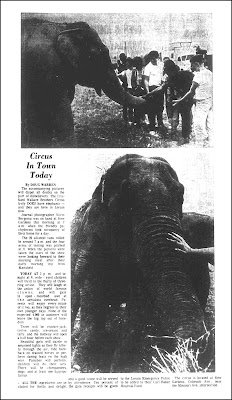 A final look at the circus in the Journal occurred on the day after the event with a few cute photos appearing on the front page.