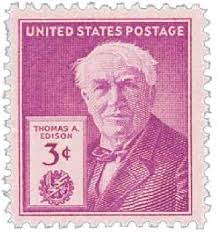 I went back and reviewed the Lorain Journals from February 1947 to see how the Thomas Edison Centennial was celebrated in Milan, Ohio where he was born. The Feb. 11, 1947 edition of the paper included this article (below).

MILAN – This sleep little Ohio town took on a gala atmosphere today as it celebrated the 100th birthday anniversary of its most famous son – Thomas A. Edison.

The red brick house that was the birthplace of the famous inventor was thrown open to the public for the first time since his widow approved plans for its restoration 18 months ago; the post office prepared to cancel and mail thousands upon thousands of “first day covers” of the new Edison stamp, and the town’s churchwomen readied a huge banquet for this evening to top off the day’s activities.

Stamps Main Interest
The post office was the focal point of the celebration as a special staff of 50 postal workers prepared the stamp covers for collectors. Postmaster James Lavey said he had a full mail sack of requests from Australia alone, with the furthest request coming from the Bank of China in Hong Kong.

Famous persons who have asked for stamps include President Truman, and Queen Elizabeth and Princess Elizabeth of England.

Third Assistant U. S. Postmaster General Joseph J. Lawler presented the first sheet of the purple three-cent stamps to Mrs. John Sloane, Edison’s only daughter, prior to the opening of public sales.

Today’s events climaxed a three-day centennial celebration giving this village of 700 persons more excitement than it has known since Edison as a boy set fire to his father’s barn and was publicly paddled for it in the town’s square.

The banquet tonight in the Presbyterian church will be served by women dressed in period costumes.


****
In that same edition of the Journal, a photo feature (below) showed the opening of Thomas Edison’s rolltop desk in his library in West Orange, New Jersey by his widow, son and daughter. The desk had been sealed since his death 16 years earlier. 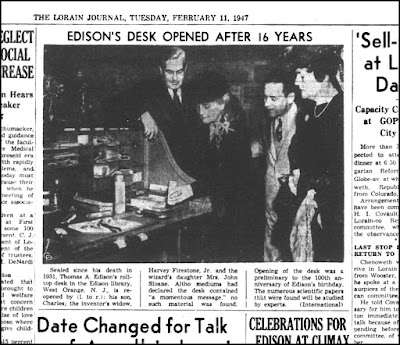 Also in that Feb. 11, 1947 Lorain Journal, Ohio Edison took out a full-page ad honoring the inventor. (Note the tiny Reddy Kilowatt next to the company logo.) 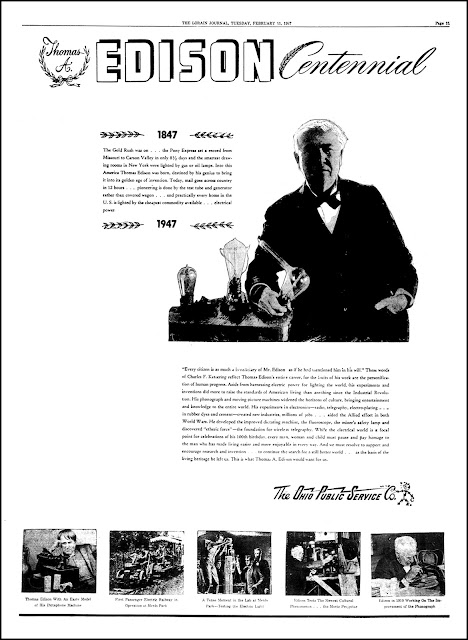 The Feb. 12, 1947 Lorain Journal included a front page story about the celebration in Milan the day before. It noted, “This village was crowded to its limits yesterday as almost 4,000 visitors milled thru the streets and attended the re-opening of the restored Edison birthplace. The home had been out of the Edison family for some years.
“A high spot of the anniversary celebration was the presentation of the first sheet of the new Edison stamps to Mrs. Madeline Edison Sloane of West Orange, N. J., only daughter of the inventor, who was Milan’s honored guest for the occasion. 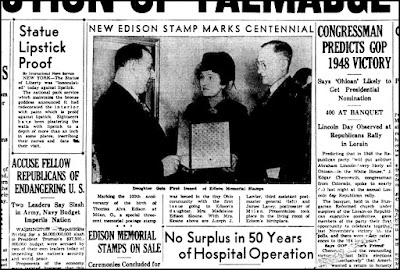 “Mrs. Sloane represented the Edison family at the re-opening of the homestead.”
There was also a celebration in Cleveland. The article noted, “Edison was honored last night at Cleveland in an address by an old friend of his, Dr. Laurence A. Hawkins, consultant in the research laboratory of the General Electric Co.
“Principal speaker at a civic dinner in commemoration of Edison’s 100th birthday, Dr. Hawkins said that “Edison is the greatest inventor that the world will ever see.”
“I can conceive of the possibility, tho not the probability, of another Shakespeare,” Dr. Hawkins said. “I cannot conceive of the possibility of another Edison."
Posted by Dan Brady at 5:24 AM