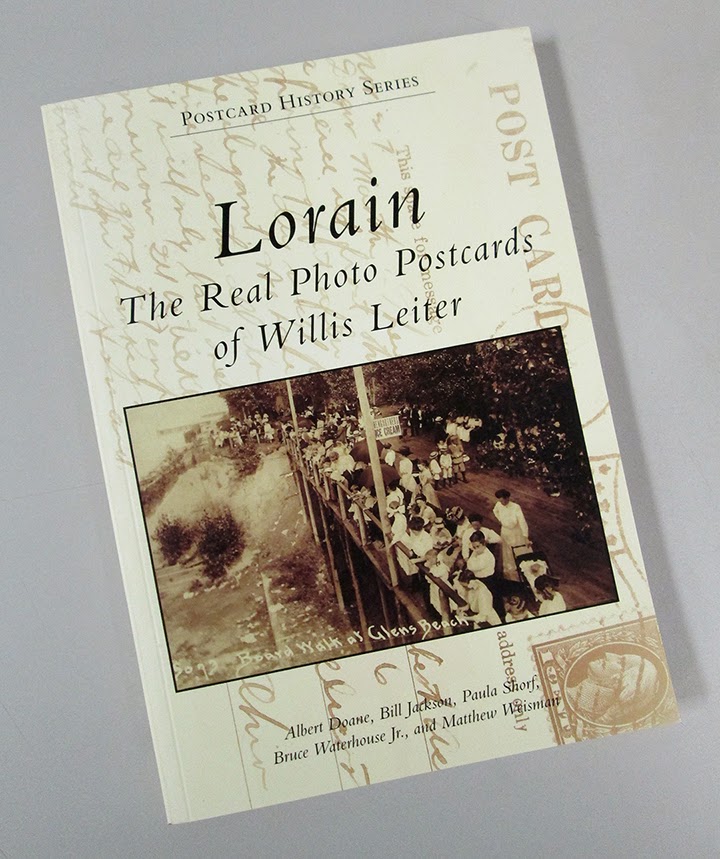 The secret is finally out – and it's good news for anyone interested in Lorain history that wants to add an invaluable volume to their bookshelf.

The book Lorain: The Real Postcards of Willis Leiter is officially on sale today from Arcadia Publising. It features the photography of Willis Leiter, who established a studio in Lorain in 1901.

Like many photographers, Leiter's business was creating charming portraits of local citizens that were suitable for framing. But much more importantly to today's historians, Leiter also documented the Lorain of the early 1900s – ship launchings, steel production, buildings, schools, churches, community events – through thousands of real photo postcards. Those postcards are the focus of the book, and with the best of them compiled into one volume, they provide rare, wonderful and unexpected views of Lorain.

Bill Jackson of Chardon, Ohio, has collected postcards for many years, with an emphasis on those produced by Willis Leiter.

Bruce Leiter Waterhouse, Jr., is a great-grandson of the photographer. He became interested in his ancestor's postcards when he saw a display of them at an exhibit depicting iron ore shipments on the Great Lakes.

How the book came to be is serendipity at its best.

Paula Shorf had been collecting Leiter real photo postcards since 2001 and had always hoped that he would get recognition for his work. At the same time, Paula and Matthew Weisman had been emailing back and forth about Lorain's shipbuilding industry, and the many Leiter postcards about that topic. A few years later, Bill Jackson – yet another Leiter collector – contacted the Black River Historical Society looking for information about the photographer. The Society put him in touch with Matthew, who introduced him to Paula. Before you knew it, the three were talking about writing a book. They were joined by Bruce Leiter Waterhouse, Jr. and Al Doane – and finally all of the players were onboard to make the book a reality.

The book can be ordered on Amazon and through the Arcadia Publishing website. It will be available locally at the Lorain Historical Society (which is currently closed for the winter).


****
As part of the celebration surrounding this book, my blog this week will focus entirely on Willis Leiter – his life, his work and even his former home on East Erie in Lorain. Plus, more about the book!
Posted by Dan Brady at 6:12 AM

Ordered mine! Also saw a few others at Arcadia I may read in the future.

Great, Rae! I managed to get an advanced copy and it is something else… one of the best parts for me is a whole chapter of 103rd OVI reunion photos!

Yes there are a lot of Arcadia books that I need to add to my library instead of reading them AT the library.. Avon, Sheffield, N. Ridgeville..the list goes on and on!

I ordered mine a couple days ago, can't wait to get it. Great post Dan, it's nice to know more of the story behind the book, and put faces to the names of a couple people I've been emailing with. Looking forward to seeing all your posts this week...more than usual, that is.

Thank you for your wonderful story about the Leiter Studio and the book that is now published about it. I am pleased that my father's baby picture was taken by Leiter Photography about 1904-1905.