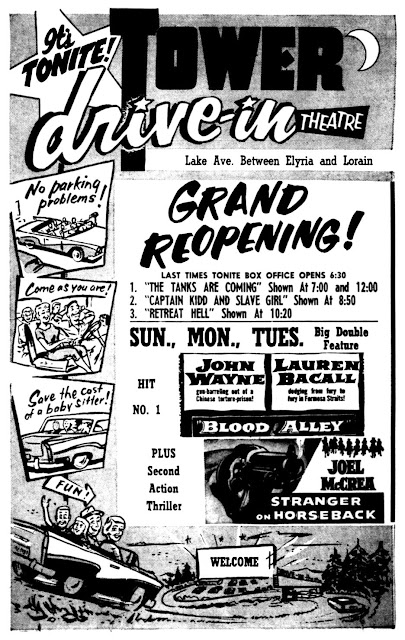 Well, yesterday you saw what a Lorain Drive-in ad announcing its March 1963 seasonal reopening looked like. Here's the same type of ad, this time for the Tower Drive-in on Lake Avenue in March of 1956.

It's actually a pretty nice ad, with great typography, as well as some great graphics explaining the reasons to go to a drive-in movie.

Of course, here's the trailer for Blood Alley (1955) starring the Duke (below). Strangely enough, I've never seen this one. Guess it's time to head to the library for the DVD, although I'd rather see John Wayne on a horse than as the captain of a ship.

And here's the trailer for the "second action thriller" – Stranger on Horseback featuring Joel McCrea (below).


It would be a couple of years before in-car heaters would eventually be featured at the Tower Drive-in.
Posted by Dan Brady at 7:50 AM