It’s been a couple of years since I featured the Harvest House Cafeteria at Midway Mall on the blog. My observation in the assortment of posts was that it seemed to be perpetually Thanksgiving at the restaurant, with a roast turkey dinner more often not being the special.

There also seemed to be an endless parade of clown illustrations in the ads, designed to appeal to the kids (in those days before clowns were seen as sinister or hiding out from the law).

Anyway, here is an atypical pair of Harvest House ads – with neither turkey or clown – from the pages of the Journal back in October 1970 – 50 years ago this month.

The first ad (from Tuesday, October 6th) features ‘All the Fish You Can Eat.’ The special was only good on Wednesday. Why not Friday? 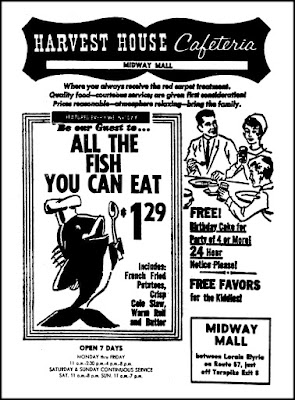 A few weeks later on October 23, 1970 (with perhaps the supply of cod or pollock exhausted), the ad promoted ‘All the Chicken You Can Eat.’ This special was good every Sunday, thus tying in nicely with the movie, play and book entitled Chicken Every Sunday.

Hey, I wrote about chicken dinners recently back here.

Anyway, ‘Chicken Every Sunday’ was apparently the menu that my father got used to while growing up. His grandfather raised chickens (and pigs too) right at his home on W. 28th Street in Lorain. Since they all lived together during the Depression (Dad’s parents lost their house), that’s what they had on the Sabbath.

Maybe that’s why in later years, Dad couldn’t stand chicken in any form.

Meanwhile, my mother reminisces that she hardly ever had chicken while growing up in the 1930s. Her father liked unusual things, like liver – not exactly a kid’s favorite.

I can't remember ever eating Harvest Houses chicken or fish.But when I was little I always remember eating their roast beef dinner when I went with my parents.I remember watching the server carve a couple of big 1/4 inch slices off of the big roast beef side behind the glass protector.Then we would slide our tray down the line.We would always get a table up against the wall.With the vynil booth type seat.Then I remember they had a coat check area where you could hang your coat up.We never hung our coats there as Dad never trusted anyone from stealing our coats.Those were good times...Too bad Woolworths and Harvest House are nothing but memories now....If anyone wants to experience the old Harvest House type environment,there is a chain of restaurants down south called K+W Cafeterias that reminds you of Harvest House.The way they serve the food.The taste of the food,etc.Old style food.If anybody takes a southern trip it is definitely worth your while to hunt one down and eat there.

Thanks for leaving the great reminisce about eating at Harvest House. I’m sure it will trigger the memories of others who appreciated its good food and warm ambience.

And thanks for the heads up about K&W Cafeterias. Here is the website with locations, in case anyone is traveling to Virginia, or North and South Carolina.