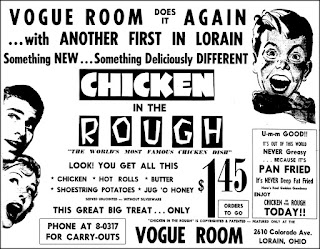 Today’s post is strictly for the birds... chickens, that is.

Above is an ad for the Vogue Room at 2610 Colorado Avenue in Lorain announcing that it was now featuring the nationally famous “Chicken in the Rough” dinner on its menu. The ad ran in the Lorain Journal on September 6, 1960 – sixty years ago this month.

Although you might not have heard of it, “Chicken in the Rough” was one of the very first restaurant franchises in the United States. As opposed to having their own standalone restaurants, the "Chicken in the Rough" people reached financial agreements with Mom and Pop eateries to allow them to put it on the menu. (It was similar to what Colonel Sanders did early in his career, before there were brick and mortar Kentucky Fried Chicken restaurants.)

So what was “Chicken in the Rough?” The meal consisted of half a fried chicken, shoestring potatoes and a biscuit. The meal also included a small jug of honey. Quite a feast, not unlike what Boston Market (or Swiss Chalet in Canada) does today.

Anyway, you might know the Vogue Room from some of its later incarnations, including The Sands, or Margie’s Magpie Inn.
As for Chicken in the Rough – it’s still around! Click here to visit its website, in case you're interested in securing your own franchise and building a nest egg.
Posted by Dan Brady at 3:22 AM

I can find plenty of Chicken in the Rough items on ebay but no honey jug. Probably not as grandiose as it sounds. They did have a neat thumb sized cream bottle for your Coffee in the Rough.