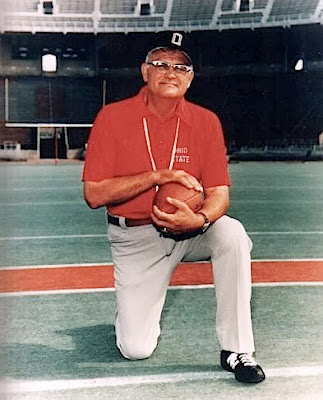 Ohio State played Clemson in the Orange Bowl over the weekend, and not surprisingly, the media used the occasion to remind sports fans that the last time the two teams had met had been in the 1978 Gator Bowl – Woody Hayes' last game as Coach of the Buckeyes.

I remember that game well. I was on break from Ohio State at the time, and was watching the game with some buddies in the lounge at Lake Erie Lanes in Vermilion.

After Woody Hayes punched the Clemson player who had intercepted the Ohio State pass (thus assuring a Buckeye loss), I remember my disbelief. Surely the player had taunted Woody, or provoked him somehow, I thought. But there was no plausible explanation as to why he did it, and Woody was fired the next day.

A few days later I was back on campus in Columbus, and it never really felt the same again. Woody Hayes was Ohio State, and I felt bad about his firing.

It was because of Woody Hayes – his great character and integrity, his personal interest in his players' educations, and what he stood for – that I wanted to go to Ohio State in the first place. Besides, his great teams of the 1960s and 70s (and their multiple Rose Bowl appearance) made Ohio State seem like an exciting place, and I wanted to be part of that excitement.

I know it was the wrong way to pick a college, but I've never regretted my decision. I look back on my Ohio State years as some of the best years of my life. In fact, I'm still good friends with two of my dorm roommates more than 30 years after graduation, and I keep in touch with a few other pals from the dorm as well.

Anyway, The Columbus-Dispatch covered Woody's firing extensively, and even offered a souvenir photo for sale (the one shown above). I bought one for Dad, who was a huge Woody Hayes fan, and stuck it in a frame for him. It hung in his basement for a long time. (I have custody of it now.)


****
The combination of Woody Hayes and Bob Hope – another favorite of mine – form a special memory of my college days.

It was during late October of my sophomore year that Bob Hope filmed part of one of his TV specials in Columbus. The gimmick was that he was going to be filmed driving up to the Ohio Theater in a 1928 roadster.

So a bunch of guys from my floor in Siebert Hall Dormitory decided to witness it firsthand. One of them had a car, so we all jammed into it and headed Downtown, arriving at the Ohio Theater shortly before the TV cameras began filming. We proceeded to push and shove our way through the crowd until we were pressed up against the glass doors to the theater entrance.

It was almost surrealistic to watch Bob Hope drive up in his antique jalopy, get out, and then walk up to the theater, passing within a few feet of us.

But the real highlight was the next day, when Bob Hope dotted the "i" in Script Ohio at the Homecoming Game halftime show – and Woody ran out onto the field to greet him.

****
I almost forgot to tell you my story about how I "met" Woody Hayes.

Although Woody had been fired as football coach in late December 1978, he was still a professor of military history at Ohio State and taught classes. So he maintained an office on campus, and despite his firing as Coach, I remained a big fan.

Now, my dorm (Siebert) was on South Campus, which to me is still the most beautiful part of the Ohio State Campus. I had the privilege of walking by Mirror Lake regularly, crisscrossing the Oval to get to class, and seeing fine old buildings such as Orton Hall and the Faculty Club.

I was walking back to the dorm one afternoon around 1979 or 80, and had taken a shortcut near the Faculty Club, when I noticed none other than Woody Hayes walking towards me. He was alone, in suit and tie, and obviously heading to the Club for some function.

I was pretty excited, and as I got closer to him, I couldn't help blurting out, "Hi, Woody!" He smiled, and said, "Hello, son!"

It made my day to be greeted by a living legend, as well as the man responsible for my wanting to go to Ohio State in the first place.
Posted by Dan Brady at 6:08 AM

Wasn't there a Mad Magazine drawing of him with his fist in a reporter's face or am I thinking of someone else?