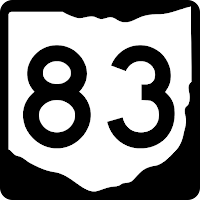 Today’s blog post was written by longtime contributor and local historian Dennis Thompson. Dennis wrote it as a response to my story a few weeks ago about Klatik’s Log Cabin and its location on State Route 83.  As Dennis explains, the road has been known by different names and numbers over the years, and it came very close to losing its current '83’ designation to a replacement highway.

The Saga of Center Road and Route 83
By Dennis Thompson

If you read the comments on Dan’s blog article about Klatik’s Log Cabin Nite Club, you will see Rick Kurish's mention of several names for what we now know as Route 83. As is typical of many of the area main roads, it started out as a descriptive name – Avon Belden Road.

As these roads went through villages, they often got renamed within the village limits. In this case, both Avon and North Ridgeville used Center Road as the local name for Avon Belden Road.

Ohio’s major roads got numbered within the state highway system in the early 1930s and Avon Belden Road was then known as State Route 76. This can be a bit confusing if you read old phone directories or newspaper articles, or look at old maps. 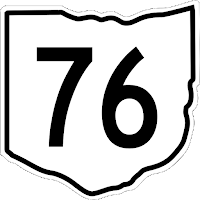 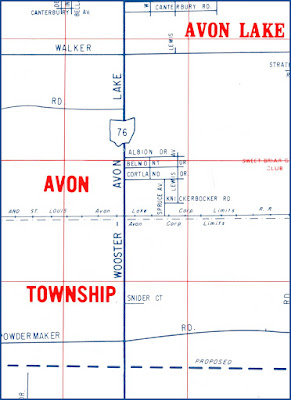 Skip forward a few decades to the time of the Interstate Highway system and we see that Interstate 76 is scheduled to be built in Ohio. 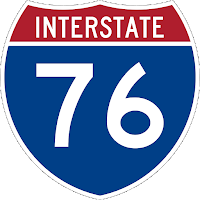 When the federal highway system was being planned, state and county officials realized there was no major state highway that ran north and south in the area. We drive on Routes 57, 58, 83, 301 and 511 to go that direction. But these are two lane rural highways that go through every village they encounter.  So they decided to add a four lane highway that was limited access as needed. They choose the recently renumbered State Route 83.

This was a part of the grand plan that added Interstates 80 and 90, and modernized State Routes 2 and 10, as well as U. S. 20 in the county. Since the plans for Routes 10 and 20 were ready to start construction, the officials decided to begin building State Route 83 where it crossed State Route 10. This would avoid a later construction that would impede traffic on Route 10. And indeed - they built that section. 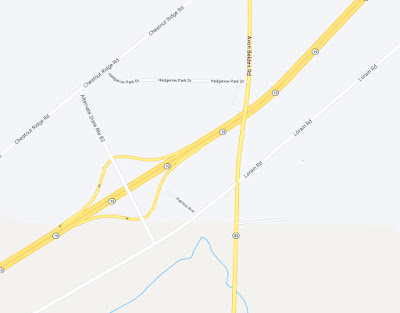 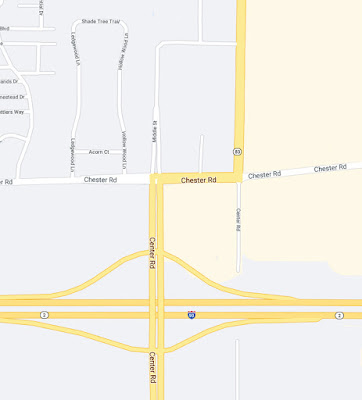 That is all that was ever built of the State Route 83 highway scheme. The project was abandoned in 1991.

Thus we still have to drive south on rural roads.  The proposed Route 83 would be forgotten, except for the fact that it made it onto some maps. These (below) are from the 1976 Commercial Survey, Lorain County Street Guide. (The never-built proposed relocation of State Route 83 is indicated in yellow.)

Although it would have been nice to have a high speed north south corridor, I hate to think of how many Lorain County farms would have been cut in half for the new highway. 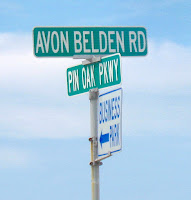 I will end with some more trivia about Avon Belden Road. I could not find a reference to when the road was first built. It seems to be complete through the county on the 1851 plat maps. It is a bit hard to tell as the road coincided with property lines. But it could not have been the Avon Belden Road in 1851 as there was no Belden yet.  Belden was originally called Rawsonville. The name was changed to Belden in 1876. It is named after Bildad Beldin, a pioneer settler. (To learn more about the early days of Grafton and Rawsonville, click here.)

State Route 83 goes all the way to Beverly, Ohio in Washington County. There it ends near a BP station on State Route 60 a couple hundred yards short of having to cross the Muskingham River. It is 157.6 miles long.

In the 1976 maps, note that it is called the Avon Lake-Wooster Road starting in North Ridgeville. I can’t recall anyone using that name but Google uses it also.

After it leaves Wooster, it is called the Millersburg Road. South of Millersburg it does not seem to have a name.

And finally, Route 83 isn’t the only state highway for which big plans were made that never got past the drawing board stage. As part of the big highway scheme, State Route 18 was proposed to have been made into a four lane highway with a bypass around Wellington. Today, parts of State Route 18 have been widened to 4 lanes but only east of Medina – not in Lorain County.

Fascinating - I knew none of this!

Here's a question I could never ever find an answer, on the topic of state highways Dan...

Why is route 58 number evenly yet runs north-south?

It’s a good question and I’m not sure what the answer is.

It may have something to do with the fact that Ohio’s highway system evolved over decades rather than being designed in one fell swoop. It was also quite complicated renumbering Ohio highways so they did not conflict with the US Highways (and later Interstate Highways). This Wiki entry tells the story:

So maybe the Ohio Dept of Highways just gave up trying to maintain the even/odd numbering discipline.

I spent most of my childhood in a lakefront just off of Route 83, went to church on that street, delivered papers on the street, went for a year to ATI in Wooster on Route 83, I now live on Route 83, have an office on Route 83, and my sister just moved on to Route 83. Great story that filled in a lot of gaps as to why it is how it is. Thank You.

I sure am happy (and I’m sure Dennis is too) that this post has triggered some good memories. Route 83 is a great road. For me, it’s always been the road to take to Amish Country, as well as the road to Aut-O-Rama Drive-in, so Route 83 = fun!