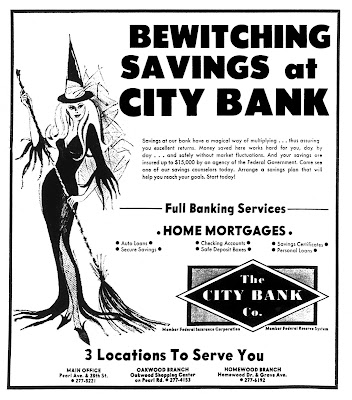 You can tell that the hit TV show Bewitched had popularized the idea of an sexy witch, because that's what you get in this ad for City Bank, which would be considered somewhat sexist today. Even the headline suggests a connection with the TV series.


****
City Bank had an interesting history and an impressive group of founders. As noted in an article in the June 21, 1955 Lorain Journal, “When the City Bank Co. was organized in South Lorain on March 2, 1899, little did the citizens here realize that the names of the organizers would in later years read like a Blue Book roster and that many of the original founders would catapult into the national spotlight in various fields of endeavors.

“Among those responsible for organizing the City Bank were A. J. Moxham, president of the Johnson Steel Company which later became the National Tube Co., Lorain Division; Pierre S. DuPont, president of the Sheffield Land Co. and later head of the great E. I. DuPont De Nemours’ extensive interests; F. A. Smythe, who was associated with the Sheffield Land Co. and later was for many years head of the Thew Shovel Co.; Judge Elbert H. Gary, chairman of the board of U. S. Steel Corporation; H. C. Ryding, superintendent  of the rolling mills here who later became head of the Tennessee Coal, Iron and Railway Co.; Col. J. J. Sullivan, prominent banker and businessman in Cleveland; Tom L. Johnson, founder of the Johnson Steel Company, one of the nation’s leading steel railway men and famous mayor of Cleveland.

“The bank, first known as the South Lorain Savings Co., became the first financial institution in the steel plant area. It was not until Dec. 5, 1905 that the bank changed its name to the City Bank Co.

“The first banking office was opened in the Steel Plant Block across from the steel company general office on 10th Avenue, now East 28th. Every evening, after balancing, the cash would be carried across the street to the Johnson Co. cashier’s office for safekeeping overnight and then carried to the bank each morning.

“A branch bank was opened at the Homewood Shopping Center on March 25, 1954.”


****
City Bank lasted until April 1984, when its shareholders voted to accept a proposed merger with Central Trust Company of Northern Ohio.

Robert Pelander, president of City Bank for nearly 40 years, passed away in November 2011.
Posted by Dan Brady at 10:30 AM

I put myself through college by working as a teller at City Bank from 1977 through 1981. I then returned to work there part time since there were no teaching jobs to be had during the Recession. My mother Pat was the head teller at the Homewood Branch adjacent to Hills Department Store, which is pretty much how I got a job at City Bank. My sister also did a stint as a teller for a few summers in the 70s. A real family affair.

I was a Floating Teller, however, and filled in for whomever was on vacation, so I could be found at all the branches from Main to North Ridgeville to Tower Blvd. to Amherst. For one miserable week, I even was in the basement of the Main Office microfilming deposit slips and mortgage payments! Great people at City Bank at all levels, almost without exception.