A Tale of Taco Boy and Taco Kid

Back in July 2011, I did a post on the Taco Boy restaurant that was located on West Erie Avenue across from the Castle (in the building that is currently home to Chapman's Food Mart). The Taco Boy restaurant opened in June 1969, to be followed by a second one on Oberlin Avenue that was part of the group owned by businessman Ken Cassell.

However, by the time of the February 1970 "quick service" restaurant article, the building – located next door to the Pizza Hut – had a Taco Kid sign.
So why did the restaurant chain change its name and mascot? 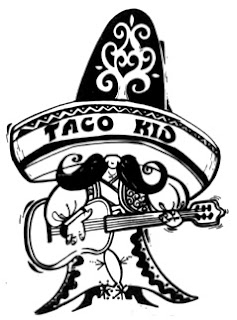 Well, I did some research and here's my theory.

Back in the mid 1960s, tacos were growing in popularity thanks to the Taco Bell chain, and quickly becoming an American favorite. Consequently, other taco chains began to pop up.

One of them was located in Oklahoma City, Oklahoma, with the name of – you guessed it – Taco Boy. An aggressive campaign to sign up Taco Boy franchisees was launched around May 1969. The parent company took care of site selection and building construction; all the franchisee had to do was come up with the $17,000 required investment.

Here's what the Taco Boy logo looked like (below).

Meanwhile in Ohio, businessman Hank Cartwright had been enjoying success in the restaurant franchising field. In 1964, he and his brother had purchased a Pizza Hut franchise in Lincoln, Nebraska. The brothers later added more units: six in Las Vegas, Nevada and two in Phoenix, Arizona. According to an article in the March 2, 1969 Toledo Blade, “they did so well in the franchise restaurant business that the Pizza Hut company bought back all the franchises for $250,000 and gave them the Toledo-Cleveland franchise area to develop.”

Cartwright opened his first Pizza Hut in Toledo in 1967 and another in 1968. A third Toledo unit was under construction, with two more planned for – not surprisingly – Lorain.

With all this franchise experience and success, it’s not surprising that Cartwright decided to start his own franchised restaurant system, called – what else? – Taco Boy! Cartwright’s Taco Boy mascot even looked vaguely similar to the Oklahoma-based company with the same name.

Anyway, by March 1969, Cartwright had three successful Taco Boy restaurants open in Toledo, with outlets under construction at Bowling Green, Ann Arbor and 44 franchises signed up. His stores must have looked very appealing to Pizza Hut, because by July 1969, Pizza Hut bought Taco Boy and all of Cartwright’s Pizza Huts for $1.2 million.

So Lorain's Taco Boy on West Erie was part of this first wave of franchising.

I’m guessing that once Pizza Hut bought the chain, the company determined that there were too many other restaurants around the country with the name Taco Boy. Pizza Hut probably also noticed that Taco Bell was using its own 'Taco Boy' mascot. 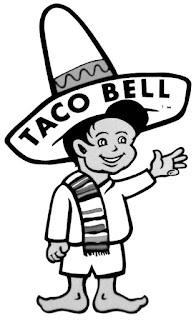 So Pizza Hut came up with the name Taco Kid – and that’s what the one on Oberlin Avenue was called, even though it was still listed in the Lorain city directory as Taco Boy.

I'm not sure how long Taco Kid lasted as a chain owned by Pizza Hut. (The Taco Kid trademark expired in 1992 according to one of those trademark websites.)

And what did Cartwright do shortly after he sold his Pizza Huts and Taco Boys? He started another restaurant chain: Olde English Fish ’n Chips!

So that’s why it makes sense that Lorain had a Taco Kid, a Pizza Hut and an Olde English Fish ’n Chips – all in a row on Oberlin Avenue.

Unfortunately, both of Lorain’s original taco restaurants disappeared from the city directories by the time of the 1971 edition. I guess they were just a little ahead of their time.
Posted by Dan Brady at 6:34 AM

While it didn't happen in Ohio, this post brings back a great memory. A Taco Kid location in Little Rock, Arkansas was the first place I ever ate any type of food that could be called Mexican. Now in California where genuine Mexican restaurants and supermarkets are everywhere, I probably wouldn't be able to stand what they served. Still, I will always have a very fond spot in my heart for Taco Kid for letting me know there was something more exciting in this world than pizza. :D

I remember the Taco Kid in Cedar Rapids Iowa. My friends and I hung out there on the weekends and had what I'd consider the best Mexican fast food ever. I really miss it.

I worked at the Toledo Taco-Boy (Kid) back in the early 70's... the Area manager (Rick Payne) was the son of some big shot over at Pizza Hut. They also had a couple of other franchises if I remember correctly (I believe one of them was called the Flaming Steer.) It was around in Toledo before Taco Bell and it was a pretty big hit here. It wasn't as organized as Taco Bell but the food was pretty good.

Was there, by any chance, a location at Lewis & Alexis? I've been trying to remember the name of the place we went to in the early 70's. We used to get a taco burger for our toddler.